LG’s was seeking to make a big splash at MWC 2020 with the launch of the LG V60 ThinQ, the successor to the late 2019 LG V50S ThinQ (also known as the LG G8X), but the event was cancelled. However, Evan Blass (@evleaks), provided a look at the device through images pulled from a leaked video that was likely intended to be promotional material for MWC 2020. The two images reveal some of the key features of the device. Despite what the images below show, the actual device won’t have a transparent back—that’s just a way for LG to point to the important features of the device without inserting a bunch of text into the video. But the LG V60 ThinQ will have four microphones, quad rear cameras, a 5000mAh battery, a USB Type-C port, a 3.5mm headphone jack (which fellow Korean brand Samsung has ditched on its latest Galaxy S20 series), and bottom-firing speakers. We assume the device will have an under-display fingerprint scanner since there isn’t a rear-mounted physical fingerprint scanner and the power button sticks out of the body. On the left side of the device, are the volume buttons and the dedicated Google Assistant button. If so, this matches the button placement of the LG G8X/V50S ThinQ. 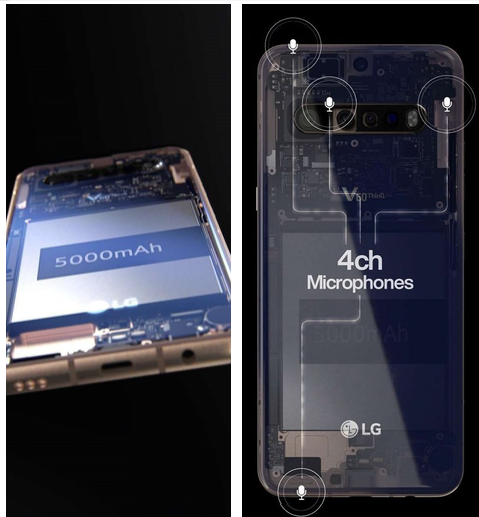 Source: Evan Blass
​
The device shown in these images looks similar to the alleged “LG G9 ThinQ” that @OnLeaks revealed last month. Those renders show a similar camera setup and bottom component placement. I believe that the “LG G9” that @OnLeaks posted about last month is actually the LG V60 ThinQ. First, @OnLeaks himself wasn’t sure of the branding; he assumed what he was posting was the successor to the LG G8, a reasonable assumption based on the timing. that the LG V60 ThinQ, code-named “timelm,” is launching soon with Android 10. series for the fall, so it’s possible that the G series may simply be postponed rather than canceled. The LG G9 that @OnLeaks posted about is actually the LG V60 and will have a U-shaped notched and flat display that measures about 6.7-6.9-inches diagonally. The “Hand ID” module from the G8 isn’t present, which doesn’t necessarily mean it won’t return in a future phone—it just won’t be on this device. The device will likely be powered by the Qualcomm Snapdragon 865 since it’s undoubtedly a flagship smartphone. If LG can keep the pricing competitive and launch with the right carrier partners, the V60 could be a successful device for LG’s struggling mobile business.