Although almost every TV testing agency rates OLEDs as the best TV, TV analysts needing to produce something; continue to point to the lower luminance of OLED TVs as a big differentiator. If 1,000 nits is the prevailing standard and basic requirement for screen brightness in an HDR context, the new LG G1 produces 20% more brightness than previous versions – according to LG’s own stats. Independent testing puts the G1 at around 870 nits for sustained brightness in the Vivid picture setting, compared to 754 nits in its LG GX predecessor.

Recently, TechRadar's LG G1 review states that, "Our own measurements yield a peak brightness reading on a 10% (APL) white HDR window of just over 870 nits. It’s a small but notable improvement over the 754 nits of last year’s GX range – and the peak brightness reduces by 100 nits or so when setting the preset to Standard. "The extent of the G1 brightness improvement versus the GX, though, tends to be between 10% and 20% across all picture presets. CRT TVs of yesterday topped out at just 100 nits of brightness and were typically graded better than the early LCDs.

The Samsung QN90A can output around 1,500 nits, nearly double the brightness of the LG G1. The Vizio P Series Quantum X can produce up to 1,900 nits. It’s worth noting that for TVs the peak brightness is a figure of merit for a 10% APL be it an LCD or an OLED. Across the entire screen, it’s a very different picture. The Samsung QN90A is good for about 700 nits of sustained brightness across the entire screen, while the LG G1 is about 175 nits.

For context, most HDR content is graded to 1,000 nits brightness, and therefore requires a screen capable of 1,000 nits to render the content correctly. Some content is graded to 4,000 nits, though it’s in the minority for now and in any case implies brightness levels that no consumer-level display tech can achieve, and professional displays used to grade content that are capable of 4,000 nits are almost non-existent.

Outright brightness levels can be an issue for OLED sets, especially when the brighter parts of a given scene take up a significant portion of the image. But there’s also a more subtle limitation at play. The ability to achieve high peak brightness isn’t just about brightness for brightness sake or for maximum contrast with the darkest parts of the image. Higher brightness also enables the retention of subtle details in brighter scenes. HDR uses Perceptual Quantization, or ‘PQ’ for short, a transfer function that includes a model of the granularity of human sight or the ability of the human eye to perceive two different levels of light.  An overly-bright display can cause posterization, which involves the degradation of what should be smooth color transitions or gradients into blocks or bands of abrupt color changes. On the other hand, if the display is too dim, details in bright areas bloom or bleed into one another, resulting in the loss of finer elements as large areas flatten out and become featureless.

TechRadar comments that OLED sets are entirely capable of HDR rendering. Nor are they saying OLED technology is inferior to LCD – it’s not. OLED has huge advantages when it comes to features like per-pixel lighting, viewing angles, response time, contrast ratio  and more. Overall, OLED technology is often clearly superior to even the best LED-backlit LCDs by many or even most metrics of performance. But when it comes to HDR rendering and particularly when high brightness levels are called for, OLED has certain shortcomings that need to be kept in mind when you’re shopping around for a truly HDR-capable television.

TechRadar, however, fails to explain why this lower luminance affects the visual perception of HDR performance. HDRcontent uses high brightness levels to do its expanded color gamut and contrast ratio justice – something needed for the rich hues and dynamic picture quality that HDR can offer. But in most instances the use of high brightness conditions is constrained to a small segment of the image, where OLEDs are capable of producing the highest brightness. For example, in fireworks or pictures of the moon or an erupting volcano. Moreover, the use of all white screen comparisons are irrelevant given that people don’t watch all white TVs, and most visual experts quote 150 nits as what the eye can process comfortably over time.

Given TechRadar’s report, one might conclude that OLEDs would exceed the performance of the best LCDs in TV watching and that streaming HDR content would best be watched on some form of Mini LED LCD.  But when RTINGS evaluated 70 top TVs in February by turning them on and running typical scripts, OLEDs occupied the top 10 positions, but more timely OLEDs outperformed the TechRadar preferred high luminance Samsung and Vizio LED displays in the HDR Movie and HDR game category. 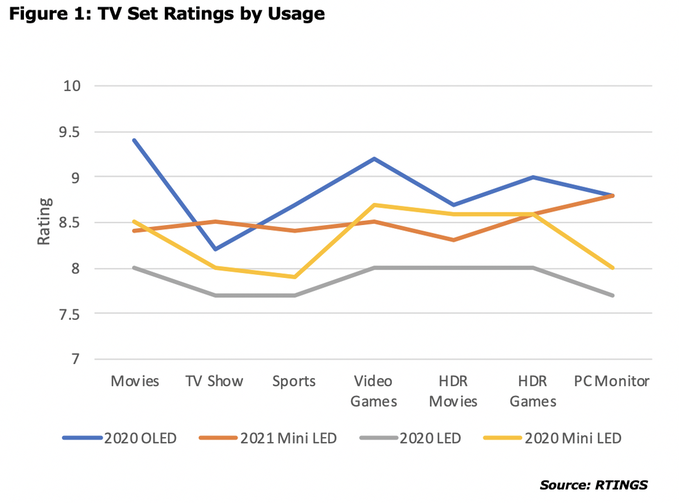 It is notable that Samsung’s Neo TV performed better for watching TV than the LGE set. In terms of price as of 5/27 for a 65” TV: