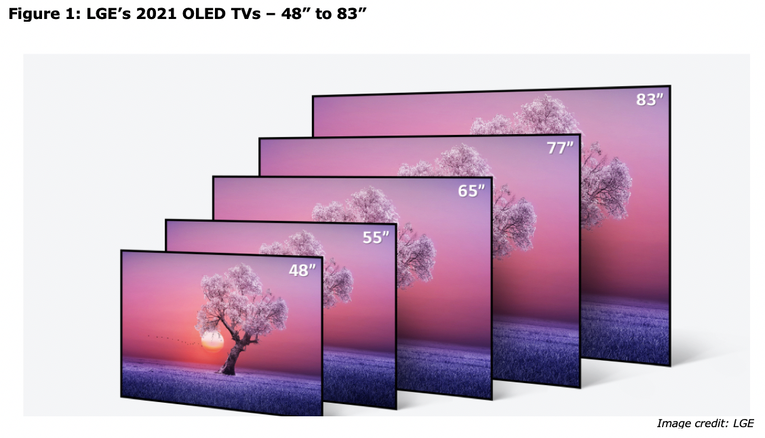 ​As LG expands the OLED TV market, the company is poised for achieving its largest annual profit this year. LG’s TV business is expected to produce 1 trillion won in operating profit this year, which would be the firm’s largest in three years. In the first quarter of this year, LG shipped out more than 790,000 OLED TVs, up 116 Y/Y.  In 2020, the TV unit recorded 969.7 billion won in operating profit, up 23% Y/Y.  This year, the market is expected to continue growing, with total volume of shipments to reach 5.89 million, up from 3.65 million last year, Omdia predicts. LG’s plan for the OLED TV market will be supported by panel supplier LG Display’s capacity growth.

LG Display is expected to be able to produce and supply 8 million to 10 million OLED TV panels this year, ramping up an additional 30,000 substrates/month at its plant in Guangzhou, China.

LG's latest beta firmware update brings support for 4K@120Hz with Dolby Vision to its latest OLED TVs, according to a user on the AVSforum. "Dolby Vision has been updated from 27.12 to 27.13, now supports 4K120 DV, the world's first 4K120  Dolby Vision-capable TV," wrote jerrytsao. This upgrade is reportedly a no-brainer" for gamers with an Xbox Series X. Microsoft's next-gen console can already output 4K@120Hz with HDR10 content, but the company is promising to add support for Dolby Vision "soon". Microsoft has already rolled out a Dolby Vision HDR test program to Alpha Ring members. Xbox says Dolby Vision will bring "brighter highlights, sharper contrast, and more vibrant colors" to games. Plenty of TVs with an HDMI 2.1 port can support 4K@120Hz, but when Dolby Vision is added to the mix, it seems that the Series X falls back to 4K@60Hz. "The Dolby Vision feature is currently in testing and LG is working closely with its partners to support functionality (including 4K @120Hz) on its 2021 OLEDs soon", an LG spokesperson told FlatpanelsHD yesterday. "More details about models will be shared soon."
Judging by today's discovery, though, it seems that LG might have already solved the problem. As for the models, LG has promised to enhance Dolby Vision support on its B1, C1 and G1 2021 OLED TV ranges. Also included as part of the LG beta firmware update are a newly optimized webOS 6.1 operating system and a brand new version of the Game Optimiser Menu. The update appears to be available in the US but there's no confirmation of it arriving in Europe. This OLED TV will max out the graphics capability of the new Xbox, giving LG a slight edge over its rivals.