LGE’s smartphone shipments peaked in Q115 at 18m/qtr. And its market share peaked in Q313 at 5.5%. Since that time shipments have dropped to 10m/qtr. with a market share ~2.7%. The company has not been able to compete as Samsung went almost exclusively to OLED displays, and the Chinese OEMs, were able to offer high performing smartphones at low price points. LGE’s smartphone offerings have been expanding and contracting over the last three years as the company struggles to find a feature/price formula that is appealing to customers without driving up production costs, but it would seem that they have yet to gain the traction that they are looking for. They seem to be cutting back on production of their upcoming (expected to be announced at IFA on August 31) V40 smartphone, which was already facing a reduced run of ~1m units, below the 1.5m units of the V30, its predecessor, last year.  Expectations for LGE’s G7 smartphone released in May, which were projected to ship 3m units, have been disappointing thus far, with ~half sold and the remainder in inventory, which puts pressure on LGE to keep inventory levels under control, as mid and low-end models are also to be released as the holidays approach, along with a G7 derivative.

LGE current smartphone line-up, when viewed by price, seems haphazard, although it covers a broad price range between $60 and $927, but when broken down by line it has a bit more logic to it, and the V40 is part of the premium group, carrying a similar margin to the other V-series phones.  Creating a differentiated product has been getting progressively more difficult as Chinese brands continue to offer more features at mid-range prices.  The V40 will have a few additional bells and whistles, particularly a 5 camera system (3 on back primary, wide-angle, telephoto) and two on the front (facial recognition) and a SBR (screen-to-body ratio) of 90%+, all well and good, but the company needs to generate significant momentum behind the V40, and internal concerns over excess channel inventory from the G7 is not likely to help. 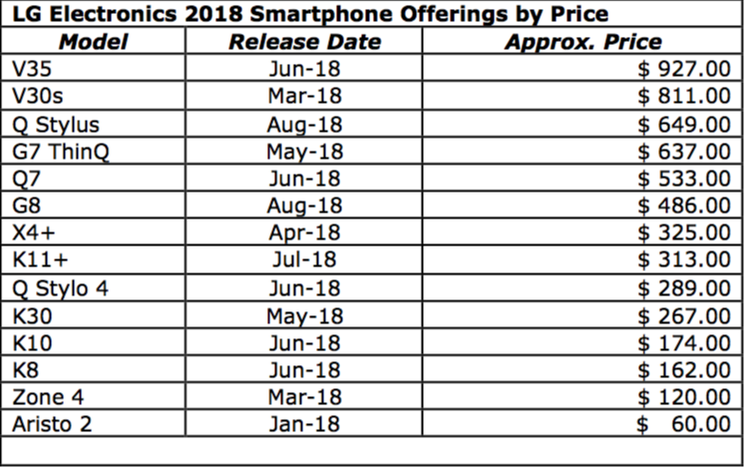 Regardless of V40’s success, LG is expected to release the V45 next year, which will be a 5G upgrade to the V40.  With the addition of multiple antennae and relatively early stage 5G chips and RF modules, the price will likely be over $1,000.  Without a reasonable amount of momentum from the V40 this year, it will be hard for LGE to move customers to a new platform that is both more costly and unfamiliar, and adding 5G to the ‘G’ series, which did poorly this year, seems to be a weak alternative.  LGE is showing its metal and although it hasn’t even been six months, since its the V30 ThinQ first arrived, they just announced the V35 ThinQ6-inch Quad HD P-OLED screen with 1440 x 2880 pixels, 18:9 ratio or ~537 ppi density While everyone others are upgrading their hardware to make it faster, the LG V30S ThinQ is optimizing the software and bringing forth Vision AI and Voice AI. The result – a more rounded and refined flagship.The specifications are quite robust:
Compared to its predecessor, everything about the screen, protection, even the look and feel is similar. The 6-inch Quad HD P-OLED screen has a full view display and supports HDR10 playback. Then there’s the super military-grade and Gorilla Glass 5 protection and IP68 certification. Under the hood of the V35 ThinQ has been further upgraded to resemble the latest that the industry has to offer. With the highest-end Snapdragon 845 chipset paired with a blazingly fast Kryo octa-core processor and a 6GB RAM to boot. Regarding the camera, the similar dual 16MP+13MP primary camera makes a return as well. Packed with a lot of features and functions, and there is an upgraded 8MP selfie camera for you to take better selfies. Storage-wise, there’s only 64GB of space available on the V35 ThinQ though. It has a microSD expansion slot that can take in up to a maximum of 512GB of additional space.