LGE announced its 2020 OLED TV lineup - which includes 14 new OLED TVs, with new models and options. Starting at the entry-level, LG will offer the OLEDBX and OLEDCX ranges, which will be what most people will opt for. Gathering the most interest is the 48-inch OLED 48CX, which comes from the MMG production like in Guangzhou starting next month.

Source: Company
The next range is the OLED WX series, which are designed as Wallpaper - with a separate connector box and the TV can be hung on the wall using magnets. LG is also introducing the OLED GX Gallery which combines a minimalist design, an ultra-thin (20 mm) form factor and a special wall mount to make it look as if it a piece of art. 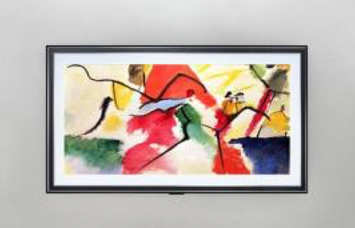 Source: Company
Next up we have LG's 8K TVs, the OLEDZX series, LG is also adding a 77" 8K model in addition to the 88" one. Finally, is the Rollable 65RX OLED TV, which was announced 2 years ago but never shipped and could now carry a $60,000 price tag.
LG will no longer offer OLED-on-glass design TVs (like the OLED E-series and G-series) as it did in previous years.  The higher-end new OLED TVs are based on the company's 3rd-gen Alpha 9 intelligent processor and can be voice-controlled with an active-listening microphone in the TV itself. The OLED TVs also feature a 120Hz refresh rate, HDMI 2.1, Dolby Atmos and support for Apple's TV app, Amazon's Alexa and Google's Assistant.