The average size of TVs continues to grow and at the high end BOE offers a 110” TV, and Samsung offers a range from 110” to  292” with a six figure price tag

By way of contrast, last year, LG Electronics and Sony  announced 48” OLED TVs and has been rumored to be releasing a 42” OLED TV panel in the near future, and as it turns out, the 48” OLED TV has proved far more popular than expected.  The smaller sies have uncovered a latent interest in gaming, which  is visual and as the space picked up legitimacy over the last few years, as gamers were willing to pay up for a better visual experience.  In the past gamers were limited to monitors, while TVs with lower resolution and slower response times were less of an option even though they came in larger sizes.  But as TV specs improved gamers saw the larger sizes as a way to enhance their ability to see both detail and a more realistic view and began adopting TVs as a gaming platform.  Since the gaming monitors could also be used for watching regular TV or streaming, the cost was justifiable spread across a wider base.

A second reason for the early success of the 48” OLED TVs had less to do with demand and more to do with supply.  Production efficiency is a key to display panel profitability and substrate efficiency, or the ability to utilize the greatest amount of the display substrate, is a large part of that.  As LG Display produces its large panel OLED displays on Gen 8.5 platforms employing a 59.2 ft2 sheet, utilizing as much of that substrate is a key to fab efficiency.  LG initiated an MMG program in Guangzhou enabling them to add 2 48” panels to a substrate that contained 3 65” panels. Essentially, getting the 2 48” panel for free except for the additional material and module costs

While this meant a slower TACT, it was much more efficient for panels 65” and larger.  By using MMG to produce 77” TV panels, panel producers are able to bring the substrate efficiency up from 59% to almost 83% by producing both two 77” panels and two 48” panels on a Gen 8.5 substrate.  This gave them the 77” panels that were in increasing demand, but also gave them 48” panels which were a novelty at the time. The 48” panels allowed for a lower priced than larger OLED TVs and were more directly competing with LCD TVs at least from an absolute price point.  As 48” TVs became more widely available, the gamers mentioned above began to pick up on the possibilities for their particular application, and demand increased.  In fact, at times the demand for 48” OLED TVs and the high volume of 55” TVs produced has led to the 48” models being higher priced than 55” models, but all in, demand for LG Display’s 48” OLED TV panels has been higher than expected, to the point where LGD is allocating additional 48” capacity at its plant in Paju, Korea, and this time exclusive for 48” panels rather than mixed capacity.

While this trend is antithetical to the norm, the desire for larger TVs, it seems LGD has created a price point that is attractive to consumers who want an OLED TV but are somewhat constrained as to budget.  As the efficiency of producing a 48” panel on a Gen 8.5 fab is the highest among all sizes 32” and above (actually 49” is slightly higher), it seems that LGD has latched onto a hot product and we expect that 48” OLED TVs, now a difficult size to garner, will become more commonplace over the remainder of this year.  This will not only open the base of potential OLED TV buyers but will help LGD to increase the overall number of panels its produces, which while only a ‘numbers’ game, will help to increase OLED TV share, making it a more visible part of the TV set business. 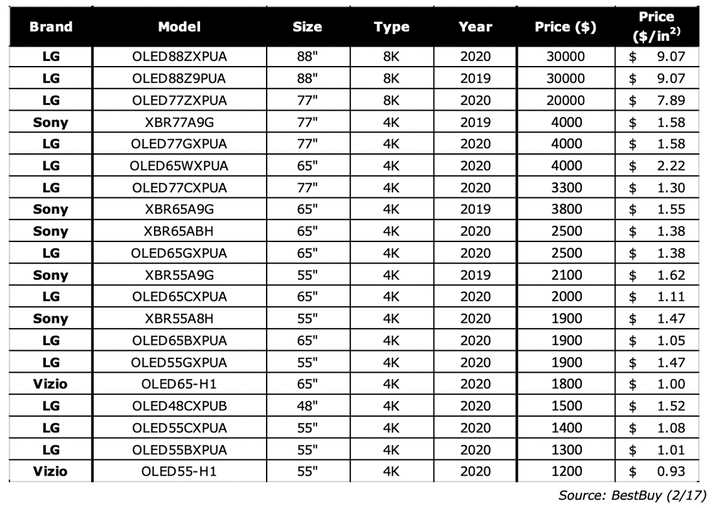