LG Display reported Q320 revenue of 6.738t won, ($5.9b) up 15.7% Y/Y and 27.0% sequentially, attributed to LCD TV panel price increases, the expansion of small panel OLED production for Apple (unsaid)  and the ramp of OLED production in Guangzhou, China.  Operating income was 164b won ($145m). Specific data points include:

Guidance
Transition – Expect to continue to move domestic large panel production from TV to IT – P7, the company’s Gen 7.5 LCD fab has been partially converted from TV to IT, with the remaining capacity being used for commercial products, which we assume to mean public display and remains a profitable fab.  P8 has also seen some conversion but the company is hedging where that fab will be next year, “keeping it flexible”, meaning if TV demand slows in 2021, it will either be converted to IT (if IT demand continues) or will be closed or possibly converted to OLED (our speculation).

Status of large panel OLED & 48” OLED TV – 48” OLED TV demand is coming from gamers but limited capacity – Guangzhou fab is dedicated to 65” and larger panels, and while MMG (Multi-mode glass) can allow for 48” production along with 77” panel production, we expect the highest customer demand will be for 65” and 55” panels, which can be produced simultaneously using MMG.  This would limit 48” production in Guangzhou to 77” demand rather than actual 48” demand.  LGD is working toward adding 48” capacity to Korean fabs, likely my adding MMG, but not likely this year, which could limit 48” sales.  If that is the case then the company’s estimate of 4m to 4.5m OLED TV units this year gets more credibility as it will likely contain less 48” TVs than we expected, a good sign.

Mini-LED –Impact on industry is small but does provide some improvement in quality. It’s a technology change that helps LCD compete with OLED, but OLED provides better quality than LCD with mini-LED backlights.

Competitors converting TV capacity to IT. – LGD admits that others are following the same path but see the reduction in overall LCD capacity due to Samsung and demand from stay-at-home situations as longer-term situations and believes their IT product technology is better than others.

All in, it was certainly a better quarter than the last few, and 4Q seems to be heading, at least for now, in the same direction.  That said, LGD (and others) is making a bet that the ‘COVID lifestyle’ is more of a permanent change than a temporary one as it adds to IT capacity.  Other than that 3Q was about as good as it could be under the circumstances, with the stabilization and expansion of LGD’s OLED TV panel business nearing completion, and the small panel OLED business being back in the good graces of Apple.  We understand that LGD has little choice but to follow the trend toward favoring IT (notebook and monitor) panel production, but they are still leaving open LCD capacity that is likely not particularly profitable, and if we would guess, would not change plans in any meaningful way until the end of 1Q ’21.

LGD is showing signs that it is recovering from the costly transition from LCDs to OLEDs. In every category the 3rdquarter is better than the average of the last 11 preceding quarters. One element of concern is the lack of free cash generation, which in Q320 was -232 KWR Bn and averaged only 1 KWR Bn per quarter over the last 11 quarters. The lack of free cash generation shifts the burden of new capex to either borrowing or capital increases. LGD’s debt was 62.0% of trailing annual revenue at the end of Q320. 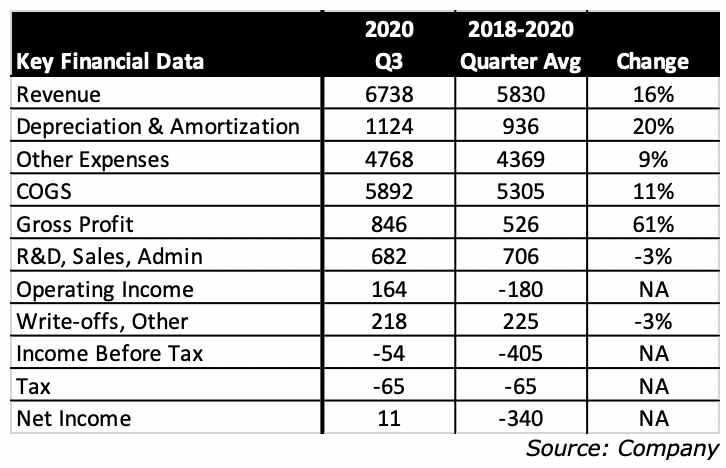