OLED evo is LG next generation OLED panel. Although the standard LG OLED hasn’t changed much since the introduction of HDR in 2015, it’s still considered the best panels for the consumer TV. According to LG, each of the self-emissive pixels in OLED evo produces more light per pixel than before. It also claims a better red and blue brightness and an added green element.  While maintaining the high-contrast clarity of current OLED panels, LG OLED evo introduces a new luminous element to improve the overall brightness and color range. OLED already excelled in picture contrast, but LCD screens have had it beat in brightness,

LG OLED vs. OLED evo: Test results
In a series of proprietary TV tests, the LG G1 OLED TV with OLED evo didn’t show as significant improvements as expected. The scores were among the best ever gathered, but compared to last year’s LG GX OLED TV, evo didn’t prove evo-lutionary. Instead, it looked more like an incremental improvement.
In terms of color accuracy, OLED evo earned a Delta-E score of 1.64. Any result of 2.0 or lower is good with the lower scores being better. It’s a very slight improvement over the GX (1.73).  There’s no improvement at all in evo’s coverage of the color gamut compared to regular LG OLED. The G1 produced 133.92 percent of the Rec 709 color space (which exceeds the basic color standard by a significant margin) but the LG GX’s score was superior, producing 134.42 percent.
OLED evo finds some redemption in the tested brightness. The LG G1 OLED reached a max brightness of 412.05 nits, which isn’t all that much better than the GX (388.88) but makes evo the brightest OLED panel

The evo panel alleviated performed well in high ambient environments. In the war movie Greyhound, which is filled with ominous, low-light scenes out in the Atlantic Ocean there are little variations of black hues. The GX struggled with those subtle differences, specifically in textures, but the G1 handled the crisp details of Tom Hanks' captain uniform and the crashing waters masterfully. Both evo’s advancements to brightness and color range contributed to the visible improvements. There wasn’t much room for improvement in motion handling and color accuracy, but the G1 maintained the picture prowess we witnessed on the GX.

LG OLED vs. OLED evo: How much better is evo?
The quantitative differences of LG OLED vs. OLED evo prove LG innovated its OLED panel this year. It feels like a smidge better than an average annual refresh. This might be disappointing for people who review dozens of sets each year but is no small feat for how far TV technology has come.  Next-gen OLED is a good sign for the direction TV screens are going. Not only is it more affordable, but it addresses one of OLED”s biggest challenges: brightness.

China’s outlook on the CE space remains positive despite the surrounding circumstances.  This positive cast is pervasive, especially when reading local Chinese articles about various aspects of CE products and the industry in general.  In an article by a Chinese outlet, the contributor cited the decrease in share of the two lowest priced segments, and the increased share in segments between 2,000 yuan and 40,000 yuan, with the conclusion that consumers’ price sensitivity had decreased over the last year and accepting higher quality TV sets, essentially high-end TVs.  The change in Chinese consumer’ s acceptance of higher prices is consistent with trend reported by DSCC that Global Advanced TV sales are growing faster than all other categories. 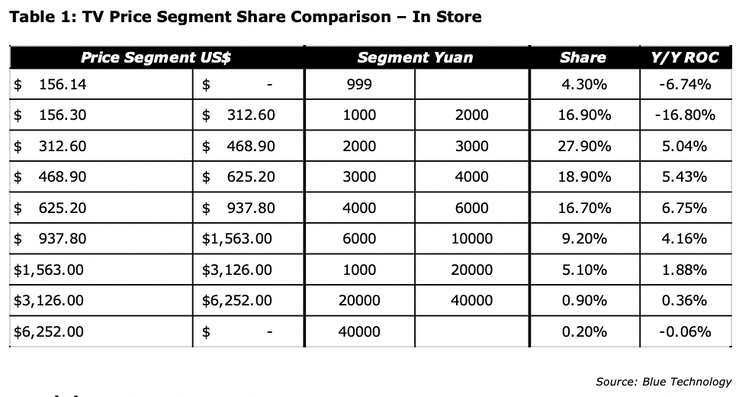