Vertical Divider
LG Market Testing StandBy Me OLED Monitor
​
LG Electronics released limited quantities of a wireless private screen and stand in Korea.  While it looks like a 27” monitor, the stand allows the display to be swiveled, tilted, and rotated, so it can be used in a variety of situations, but the real feature that seems to have attracted attention is the fact that the display can operate for up to 3 hours without power.  According to LG, this means as long as you have a wireless connection available, you can take the monitor anywhere in the hose or even outside, and not have to go searching for an outlet to plug it in. The device is based on WebOS 6.0, which is the same as the LG 2021 TV line which gives access to the LG Channel which provides 144 free channels (in Korea), and when you realize you have left the remote upstairs, you can use the touch screen controls.  To make it more useful, LGE has included the ability to download apps from its store, many of which are those used in smartphones, so users will have little learning curve with the touch screen, and if you turn on your smartphone’s NFC app, you can just tap the phone on the NFC logo that will appear on the screen and the phone’s display will appear on the monitor, which means you will have less chance of going blind from watching movies on a 6.5” screen.

LGE put a limited number (300) of the devices on pre-order status both on its website and at a single store, with all units selling out in 1 hour, with a sequential delivery schedule beginning next month, and the promise that another on-line pre-order session will be held before the official launch next month.  LGE says this new form factor is part of its program to adapt its products to a ‘new lifestyle’, although portable TVs, albeit far smaller, have been around since the 1970’s, with this shot seeming to be a step in the right direction for those that do not feel obligated to have a static TV in every room. 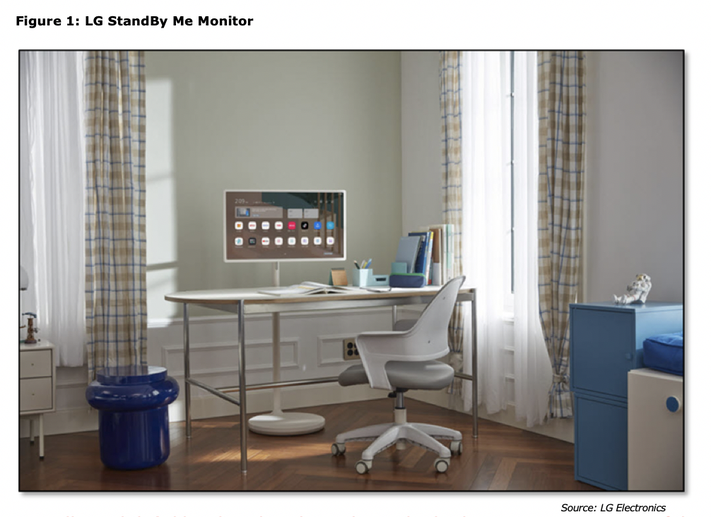 Initially, I didn’t like the idea, but when I looked up at my monitor, I felt it would clear room on my desk, while taking up a minimum of floor space
​