​LG offered a new take on foldable phones with its LG G8X ThinQ Dual Screen smartphone. This new LG flagship comes with an add-on dual-screen case in the box which doubles the screen size without any complexions like other foldable devices. This Dual Screen makes this otherwise normal flagship device much more useful when working from their homes with limited workspace. (Really a Stretch for a Benefit)  Alongside the Dual Screen form factor, LG G8X has all the elements of a perfect smartphone like a flagship processor, impressive camera setup, big battery with fast charging support.  LG bundled the dual-screen case with the G8X. This case has two displays- there is a small 2.1-inch cover display that shows notifications and also lights up when the phone is raised.

It displays the battery, time & date alongside the app icons that have notifications. The monochrome display is hard to see because of the mirror finish. When the dual-screen case is opened, the second display is. visible on the inside. This is the same 6.4-inch OLED display with a waterdrop notch just like the phone’s main screen. The notch seems pointless as it does not house anything like the camera on the main display. The dual-screen case is easily detached to use the smartphone normally.

Dual-screen Multitasking
The dual-screen on LG G8X can run two different apps at the same time and can  swap apps between the two screens using just a three-finger gesture. The dual-screen multitasking feature enhances productivity by:

The LG G8X comes with a game mode and takes full advantage of the second screen. One of the screens can be used as a gamepad while the game is running on the other one. The Game mode also allows a choice of different types of custom gamepads as per the genre of the game. Apps that support dual-screen mode, can be used on both screens simultaneously

In a time when most of the flagship smartphones boast of three or four rear cameras, the LG G8X ThinQ still comes with a dual-camera setup. The primary camera on G8X is a 12-megapixel sensor with an f/1.8 aperture and the secondary camera is a 13-megapixel wide-angle sensor with a 136-degree field of view and an f/2.4 aperture. 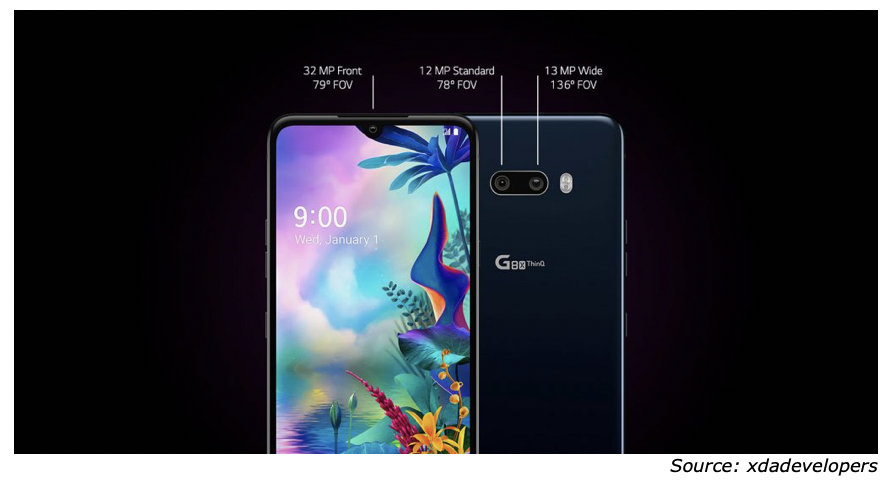 ​The camera has multiple modes to choose from, including Portrait mode, Night mode, etc. You also get an AI action shot mode for fast-moving subjects. The 32-megapixel front camera also delivers good selfies. It also comes with portrait mode which blurs the background before taking a shot. Video recording offered at 4K 60fps for the main camera and 4K 30fps for the front camera. The primary rear camera has OIS and uses EIS when recording video.

There is also a toggle to enable the dual-screen as a viewfinder utilizing the dual screen case in the camera app as well.

The LG G8X is powered by Snapdragon 855 SoC which is paired with 6GB RAM and 128GB storage. It has a 4,000mAh battery with support for fast charging via USB Type-C. The dual-screen case also has a magnetic connector to charge the phone.
The LG G8X offers good performance with a powerful SOC and 6GB of RAM. There is  no lag while using the smartphone even with the secondary display running a completely different app. The device was super smooth while multitasking and could handle the load of running two apps simultaneously very well.