LG has heretofore been reluctant to ger into the Foldable Market and has delayed release of its rollable TV. But last week, the Asia Times confirmed the 3D rendering image of LG Electronics' smartphone with a combined foldable and rollable format. The hybrid phone (tentative name) looks longer than the normal product when folded. The thickness is the level of a thin OLED added to a normal smartphone. All parts, such as batteries and mobile application processors (APs), are mounted on the body. The flexible display wraps the back of the smartphone (main body), and the screen protrudes to the side of the main body. In this state, by pulling the right side of the smartphone, the curled display spreads out like a scroll, and can be used like a tablet. The display surrounding the main body can be rolled out and used as a larger screen. In the rendered image expressing the display with the display curled behind the main body, it was also possible to see the display curling inward. A foldable display device patented by LG Display. By unfolding the display covering the main body and folding it inside, it has the usability of a laptop. 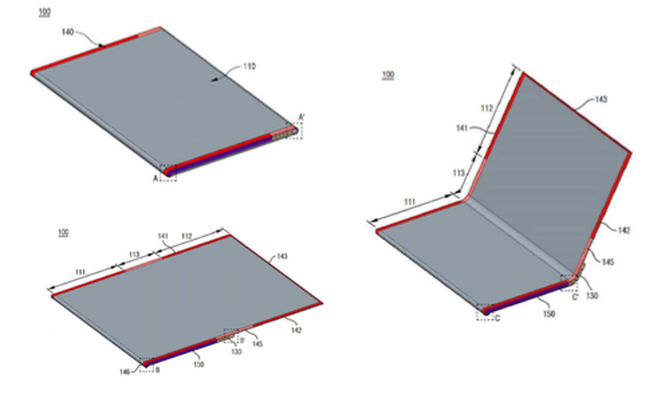 Source: Cypris
The details of how to use this product are described in LG Display's' Foldable Display Device', patent which was released last week According to the patent, the display can be selectively used in dual mode (expanded state), extended mode (pull state on the right side of the device), or pivot mode (state where the display is folded in half). In other words, you can enjoy the usability of smartphones, tablets, and laptops. LG Electronics confirmed the foldable function in April and LG Electronics’ product is undergoing field tests to improve the durability of the flexible display.
"The flexible display has a total of 12 layers of film on it, and we are currently struggling to secure the durability," said the official. From: Asia Times
​