Vertical Divider
LG Developing Unusual Dual-Screen Smartphone
May 17, 2020
​
LGE has developed the “Wing”, a phone that is currently in development for release in 2H (reportedly) that is a dual screen device.  Dual screen phones are not that unusual, some of which fold, and some slide out, but the LG ‘Wing’ series is expected to take the current LG Velvet models and add a 4” sub-screen to the 6.8” main display.  What makes this different, and as of this point, we do not know mechanical details, is that the sub-screen can be pulled down when using the main screen horizontally, which allows the main screen to be used for an image, while using the sub-screen as a keyboard or editing tool.  When using the phone in vertical mode, the sub-screen is moved to the side rather than the bottom. 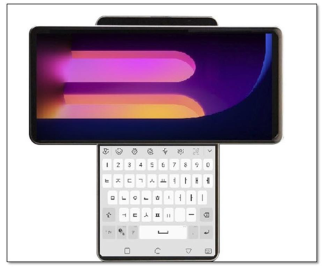