LG unveiled its first QNED MiniLED television a name that LG has chosen to describe the technology used to elevate performance to a level that’s worthy of something selling in an elevated-but-not-flagship price segment. The goal is to bridge the gap in performance offered by OLED. The ‘Q’ in QNED signifies quantum dots. The ‘NED’ part of the acronym is a reference to LG’s proprietary NanoCell LCD-panel technology. Such displays feature an IPS LCD panel with enhanced color and viewing angle properties. 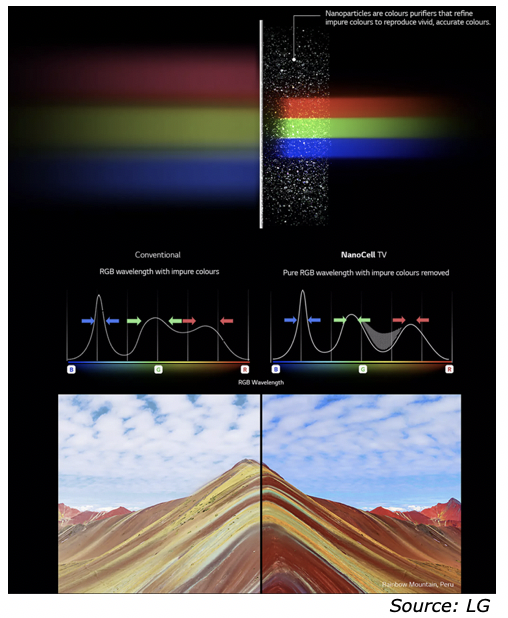 More consistent image quality at off-axis viewing angles is another one of OLEDs strengths, but with NanoCell technology, LG is attempting to bridge this gap, too, by applying another film layer of nanoparticles on top of the LCD panel to absorb unwanted stray light at particular wavelengths. This not only enhances the purity of color and contrast on-axis, it helps to keep this enhanced performance at wider viewing angles as well, with a more consistent image that has better color rendition and an image that appears less washed-out.

so dimmable backlights are used as a means to boost contrast performance.
Unlike more traditional edge-lit or full-array local dimming (FALD) backlight technologies, MiniLED ups the ante, going from tens or hundreds of individually addressable LEDs to tens of thousands. LG’s own MiniLED backlight solution consists of up to nearly 30,000 LEDs that can produce phenomenal peak brightness and a claimed contrast ratio of 1,000,000:1.
​
These LEDs are supplemented by up to 2,500 individually addressable zones to provide advanced local dimming, providing a smarter and more seamless dynamic contrast system that removes many of the inherent problems previous techniques had, such as blooming, a halo artifact where pixels surrounding a bright object appear brighter than they’re supposed to be. With more addressable zones for controlling the backlight, MiniLED lessens these artifacts dramatically. MiniLED is also scalable, adapting to displays of all sizes, making it a great backlight option for all LCD-based displays as we move into the future.