LG's new Evo TVs for 2021, along with the brighter OLED models Sony announced, represent the first major evolution in OLED since HDR itself in 2015. LG's 2021 OLED lineup is shown in the next table. 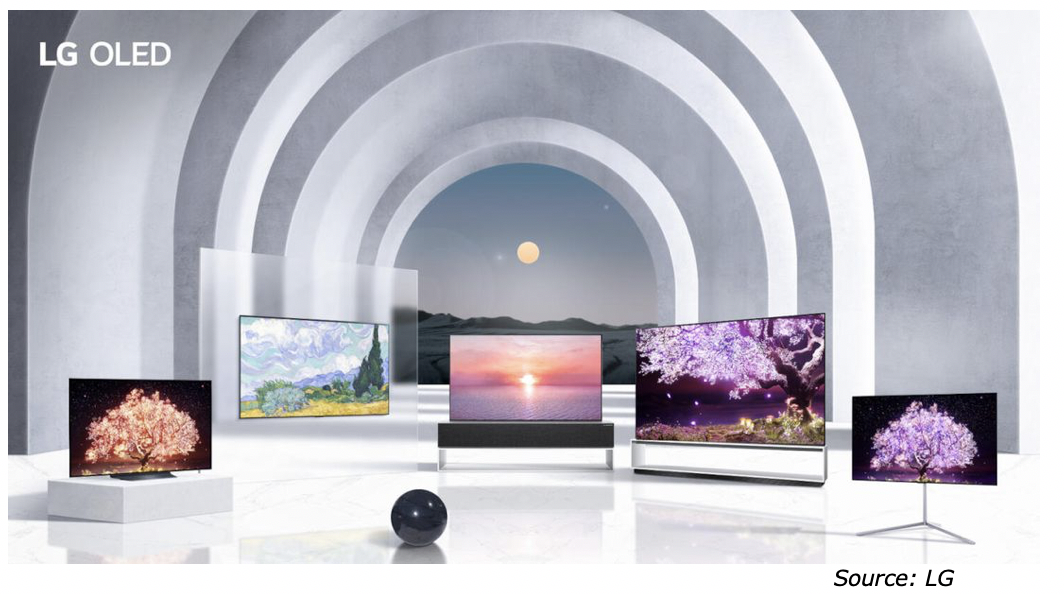 ​
Z1 series:  LG's 2021 Flagship OLED lineup is only available in the two sizes and it's the only OLED you can buy with 8K resolution. The 77-inch size will get the same Gallery design as the G1 below. I still consider 8K TVs a waste of money, and 8K OLED TVs even more so, but if you're wealthy, it's the next best thing to MicroLED. FYI the 88-inch version cost $30,000 in 2020.
G1 series: The G stands for Gallery, a reference to the slim, wall-hugging design first introduced last year, but the biggest upgrade is Evo. The only way to get LG's new, brighter panel is to buy its G1 series -- none of the other LG OLEDs have it. Evo TVs have a new luminous element, described as a new layer of green by the LG rep who briefed me, which provides more color purity and extra brightness. How much brighter the rep wouldn't specify.
The G1 and Z1 models also have a newly designed remote that includes separate buttons for all three voice assistants built into the TV -- Google Assistant, Amazon Alexa and LG's ThinQ system -- as well as additional hotkeys for more streaming services.

C1 series: As with 2020 LG's "C" series of OLED TVs is the baseline, with the most sizes and the company's latest 4K processor. New for 2021 it's adding a new size, 83 inches, to keep up with the influx of 85-inch LCD TVs from competitors. Otherwise, it's very similar to the 2020 CX, although LG has upgraded its A9 processor again to the fourth generation, adding scene detection and upgrading object enhancement. I expect any image quality improvement over the CX to be minimal, but we'll have to wait for reviews to be sure.
A1 series: As LG's least expensive 2021 OLED TV, the main difference between the A1 and C1 is a less impressive processor and fewer HDMI inputs (three instead of four). At CES reports surfaced that the A1 series would have a 60Hz refresh instead of the 120Hz found on the C1 and above, and also lack HDMI 2.1 input capability, so it won't accept the 4K/120Hz signals or work with variable refresh rate. If that's the case it won't be able to unlock the full potential of next-generation consoles like PS5 and Xbox Series X.

Game Optimizer: The CX is the best TV for gaming and LG (in the C1 models and up) will continue to support next-gen gaming features like Nvidia G-Sync, FreeSync, VRR and 4K/120Hz input (on all four HDMI ports), as well as adding a new Game Optimizer feature. It's designed to automatically recognize and classify games by genre, for example First-Person Shooter, Strategy or Role-Playing, and adjust contrast, clarity and shadow detail accordingly -- for example making shadows brighter in FPS games to reveal hidden enemies. The TVs also have a single screen that gathers all game-related data and settings, including genre settings, VRR status, blue light reduction and input lag delay, in one place.

Cloud gaming built-in: New for 2021, LG's TVs will work with Google Stadia, the search giant's game streaming platform. In theory all you'd will need to play is one of the platform's controllers and a fast internet connection. LG's Stadia-equipped TVs will also be able to stream in 4K HDR to Stadia Pro subscribers. Separately, LG TVs are adding a built-in app for the Twitch game streaming service.