Lenovo To Release Foldable Notebook w/OLED Display
​
Lenovo unveiled the world's first foldable laptop - the ThinkPad X1 Fold; a Windows 10 Pro laptop that uses a 13.3" 2048x1536 foldable OLED display. The X1 Fold features an Intel chipset (unspecified yet) and a wireless keyboard. The battery life should be about 11 hours. 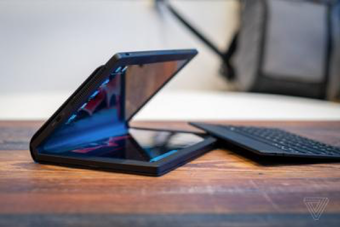 Lenovo says the ThinkPad X1 Fold will ship in mid-2020 starting at $2,499. Lenovo reveals that LG Display is the producer of the foldable display. LG's collaboration with Lenovo was announced in May 2019 - but in November 2019,  BOE also said that it is collaborating with Lenovo and that it supplied Lenovo with the 13.3" foldable OLED it used in the prototype ThinkPad X1 foldable laptop it demonstrated in May 2019.

Intel unveiled a new concept device called the Horseshow Bend, which uses a 17.3" foldable OLED display that folds into a 12" display. The device is based on Intel's upcoming "Tiger Lake" mobile processors. Intel says that the Horseshoe Bend can be used in a number of postures for varying user experiences: laptop, all-in-one, lay-flat, canvas or book. It has also been developed with a detachable keyboard that fit seamlessly into the device when folded for easy transport. In March 2019 it was reported that Intel is looking at laptops with foldable OLED displays, working together with LG Display, Samsung Display, BOE and Sharp, but for a 17.3” display, LG is the likely supplier. This is the second foldable patent filed by Intel, showing that the company has taken a more serious interest in mobile devices. Unlike the first concept released last year, this one has only an outward-folding display, but the folding mechanism appears to be much sturdier and the screen itself is completely bezel-less. From: Forbes