Lenovo has refocused its mixed reality ambitions to enterprise customers, as it is interested in producing headsets that will be shared by average users in classrooms, museums, and doctors’ offices. To that end, the company announced a new all-in-one enterprise headset called Mirage VR S3, featuring 4K displays and a more easily cleanable face plate deemed “suitable for mass use” in the COVID-19 era. The Mirage VR S3 was codeveloped with Pico, which recently started shipping higher-end Neo 2 and Neo 2 Eye enterprise headsets under its own branding. While Lenovo’s model is similarly capable of standalone operation, it uses a less powerful Qualcomm Snapdragon 835 system-on-chip and 3DoF tracking, compared with Neo 2’s Snapdragon 845 processor and 6DoF tracking. But it packs two 2160 x 1920 displays, a 101-degree field of view, and greater than three-hour battery life, all within a relatively light 1.04-pound housing that’s compatible with eyeglasses. The balanced specs are designed to appeal to health care providers, for use cases that include both practitioner training and patient therapy, as well as to educators seeking affordable, safer VR alternatives to field trips and lab experiments. Lenovo also expects the Mirage VR S3 to be used for enterprise safety instruction, law enforcement high-risk scenario training, and executive soft skills development — applications that might otherwise be handled by an Oculus Go but will benefit from the S3’s higher resolution and ergonomic improvements. Apart from the older Snapdragon chip, S3 is also behind the hardware curve in supporting only last-generation wireless standards (Wi-Fi 5 and Bluetooth 4.2), as well as a single 3DoF controller. But Lenovo hopes to make up for that on the software side, with support for the company’s ThinkReality AR/VR app software platform, including enterprise integration and IT-level management of apps and devices. The S3 also supports the Lenovo VR Classroom 2 education platform and includes global end-to-end enterprise service through its lifecycle. The Mirage VR S3 will be available in the third quarter of 2020 across North America, the U.K., France, Italy, Spain, China, and Japan. Enterprise pricing will be available through Lenovo’s ThinkReality website. 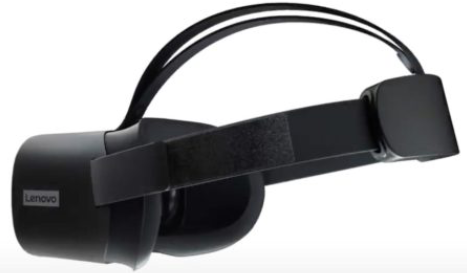 Source: Company
​The Valve Index is one of the best VR headsets available and it's also one of the most expensive, which makes HP's latest headset, the Reverb G2, intriguing. Designed with help from Valve and Microsoft, the G2 is a $599 device that may just hit the sweet spot for those looking to get into VR now that compelling games like Half-Life: Alyxare available to play. The G2 retains the sharp 2,160 by 2,160 per eye resolution of HP's previous Reverb headset but compliments the LCDs with lenses designed by Valve. HP has also added a new IPD toggle that allows you to adjust the distance between the lenses to accommodate the gap between your pupils better. Valve likewise helped design the G2's near-field speakers -- so much so that they almost look like they were taken directly from the Index. When you put on the G2, the speakers will sit about 10mm away from your ears and deliver fully immersive spatial audio. Out of the box, the speakers support Microsoft's spatial audio platform, and a new spatial audio format developed by HP Labs.  For tracking, the G2 features four cameras that HP claims can capture more movement. More importantly, you don't need to use external sensors in conjunction with the G2 to move around in games and other VR experiences. That said, the headset doesn't offer a fully untethered experience, but you do get almost 20 feet of cable to work with. At 1.21 pounds, the G2 is a touch heavier than its predecessor. However, HP says it features several enhancements that help make it more comfortable to wear over an extended period. To start, HP says the headset's weight is better distributed and the facemask features more cushioning. When you need a break, you can also flip the facemask up 90 degrees. Similarly, you can remove the face gaskets to clean and sanitize them. The company has also done away with the 'halo' style headband of its previous Reverb headset in favor of a more traditional one. At $599, the Reverb G2 is the same price as the model it replaces. However, its price tag puts in between two of the better headsets you can buy at the moment, the $399 Oculus Quest and $999 Valve Index. Considering the Reverb G2 comes with some of the features that make the Index so special, it may become popular for those searching for a more value-conscious headset. You can pre-order the Reverb G2 starting today. HP expects to start shipping the device sometime in fall 2020.