LCD Panel Revenue, Shipments and ASP Up M/M in July 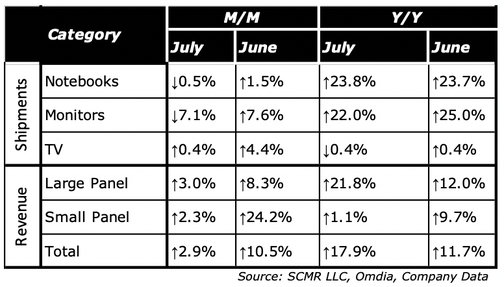 BOE, CEC-Panda and CSoT’s  large panel production had negative sequential sales, while all other panel makers were up 2% to 11%. 2H20 is expected to be up 7.25% sequentially in terms of overall panel sales, which would put the year down ​2.2%.  This scenario anticipates normalized demand for monitors and notebook demand slowing in 4Q, while TV demand peaks in September, with a small demand refresh in December in anticipation of Chinese New Year, which falls on February 12, 2021.  Included are stronger 3Q smartphone panel shipments, peaking a bit later than usual due to Apple iPhone delays, boosting 4Q a bit above the norm, and a relatively modest back-to-school holiday season. From: SCMR LLC