Vertical Divider
LCD Panel Prices – Up, Up and Away 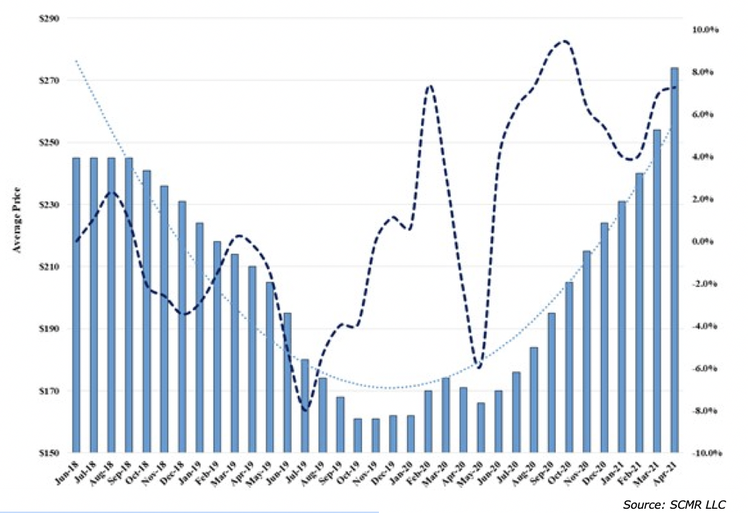 The ASPs are currently being impacted by:

The increase in panel prices is unlikely to be offset by reductions in the cost of Mini LEDs anytime soon. Epistar will hike quotes for LED and MiniLED chips in second-quarter 2021 to reflect increases in material costs, according to company president Patrick Fan. Rising IT product prices have shown that clients would be willing to accept price hikes, Fan said, adding the hikes in the company's products will be moderate. Epistar has annual MiniLED production capacity equivalent to one million 4-inch wafers, a level enough to meet demand in 2021, Fan indicated, and Epistar will not expand the capacity at the moment but will plan capacity expansion for long-term operation. Yield rates for MiniLED have risen to satisfactory levels and if MiniLED-backlit products sell well, MiniLED penetration in backlighting will rise with production cost declining, Fan noted. Demand for AlGaInP (red) LED chips has rebounded since second-half 2020 and the corresponding production capacity has been fully utilized, with the revenue proportion standing at below 40% at present, Fan said. The capacity utilization for blue-light LED chips is below 90% currently, Fan noted. Epistar and vertically-integrated LED maker Lextar Electronics jointly own Enostar. MiniLED backlighting is used for high-end and gaming notebooks, LCD TVs and automotive displays, Lextar chairman David Su indicated, adding the adoption is expected to extend to other product lines in second-half 2021. EnnoStar expects double-digit gross margin for first-quarter 2021 and aims to reach monthly break-even operation as soon as possible.

The large panel segment grew 11.9% m/m in terms of revenue and 8.5% in terms of shipments, while large panel ASPs grew 3.1%.  On a y/y basis, revenue grew 56.6%, with shipments up 26.7% and ASP’s up 23.6%.  While the y/y growth was impressive in March, the industry is still comparing against a period of declining panel prices near the onset of COVID-19, so we would expect y/y comparisons to remain unusually strong for the first half, while becoming progressively less abnormal as the year progresses. 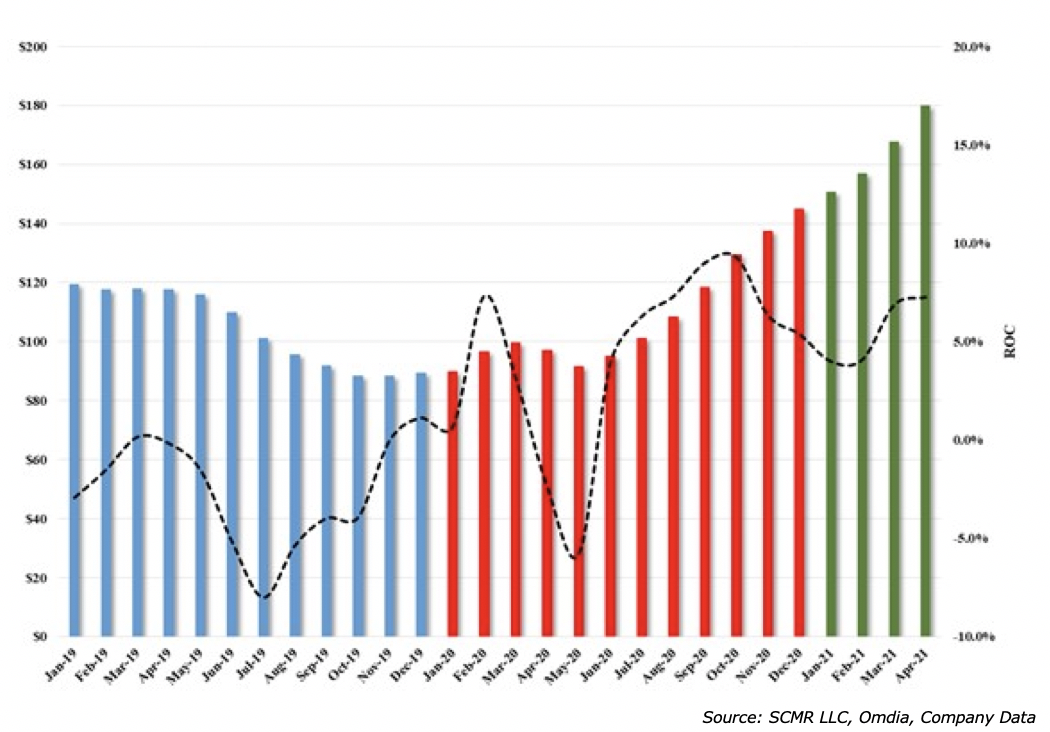 On a regional basis Taiwan experienced the largest sequential increase at 20.9%, while Japan saw the largest increase on a quarterly basis, but Japan’s share of the LCD large panel market is miniscule compared to other regions.  Samsung Display and LG Display have decreased their large panel capacity through plant sales or closings.

On a company basis, the table below looks at those panel suppliers that are primarily large panel producers, as a number of small panel producers also produce small quantities of large panels.  This can make large panel performance for these types of producers very volatile, given that small changes in such numbers can lead to large percentage changes, but little impact on the industry as a whole.  Companies excluded include: 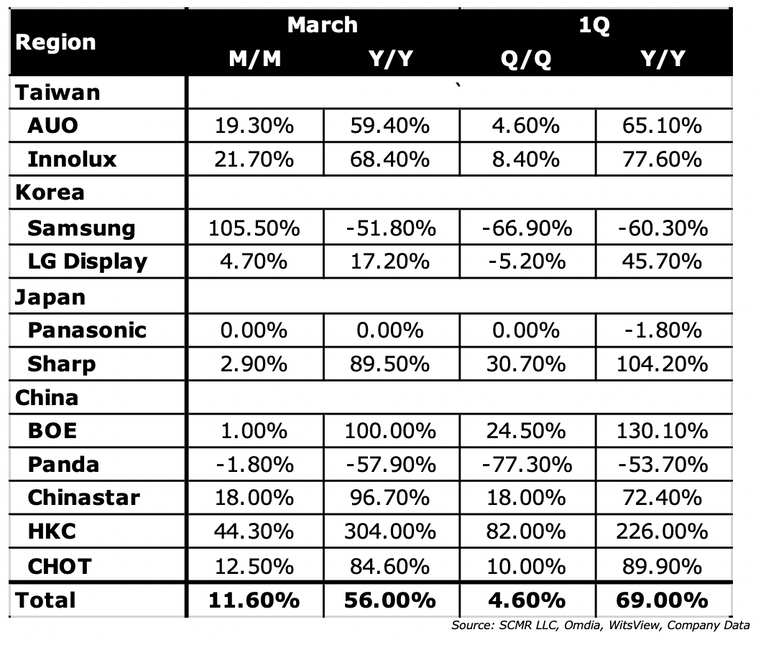 Given the relatively unusual circumstances of last year, most of the y/y comparisons don’t give much new information, and the negative results from Samsung Display and Panda have more to do with the sale of LCD fabs than actual performance, with BOE and ChinaStar being the receivers of those fabs.  Sharp had its best monthly revenue (Feb./Mar.) since mid-2014, and Chinese large panel producers HKC and CHOT saw their best quarters since inception.  While capacity increases are embedded in some of the more positive monthly and quarterly results, higher utilization and large panel price increases would be the root for much of the gains

Large panel shipments did not see growth in 1Q, at least on a q/q basis (-1.8%), however looking at the 1Q 5 year q/q average for large panel shipment, which is -9.7%, the relatively small drop in large panel shipments in 1Q is unusually strong.  Subsequent q/q growth will compare against higher averages as noted in the table below.  Shortages in the display space have become more of a problem for large panel producers as the year has been progressing, and with relatively little foundry capacity increases (drivers, TCONs), and tight supply of glass and raw material price increases, we expect large panel price increases will be the only way large panel producers will see increasing revenue on a monthly or quarterly basis.  There will be some capacity increase at Gen 7 and above fabs (+4.1%), but the bulk of any improvement will come from further panel price increases, against progressively stronger 2020 results, particularly in 2H, and higher 5 year averages. 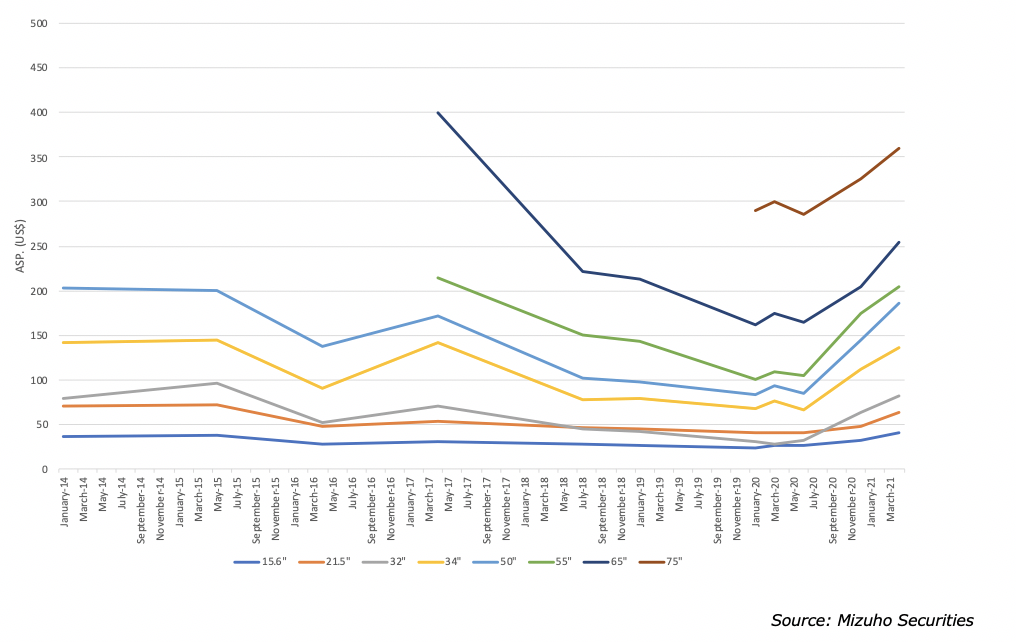 Smartphone shipments in India saw a 16.2% y/y increase in 1Q.  While India is experiencing a massive COVID-19 outbreak, that spike did not begin until mid-March and did not hit previous peaks (far outstripped currently) until early April, so it would have little effect on smartphone shipments in 1Q..  While Xiaomi (1810.HK) retained its leadership position in the Indian smartphone market, Samsung saw the strongest y/y increase in shipments in 1Q with an increase of 34% y/y.  That said, despite the tensions between China and India, Chinese smartphone brands still represented ~70% of shipments into the Indian market, although only OPPO saw any substantial shipment increase over last year’s 1Q shipments.

We note that Samsung saw its leadership position drop to 2nd place in 4Q ’20 as Xiaomi pushed its focus up a bit to the premium category in India last year and offered large discounts during the 4Q holiday season, but Samsung’s broad mid-tier offerings seem to be appealing to an increasing number of customers on a regular basis.  While not in the top 5, we believe Apple was in 6th place for the 2020 year, with the iPhone SE offering an appealing price point for more budget conscious buyers who still wanted the cache of an Apple product. 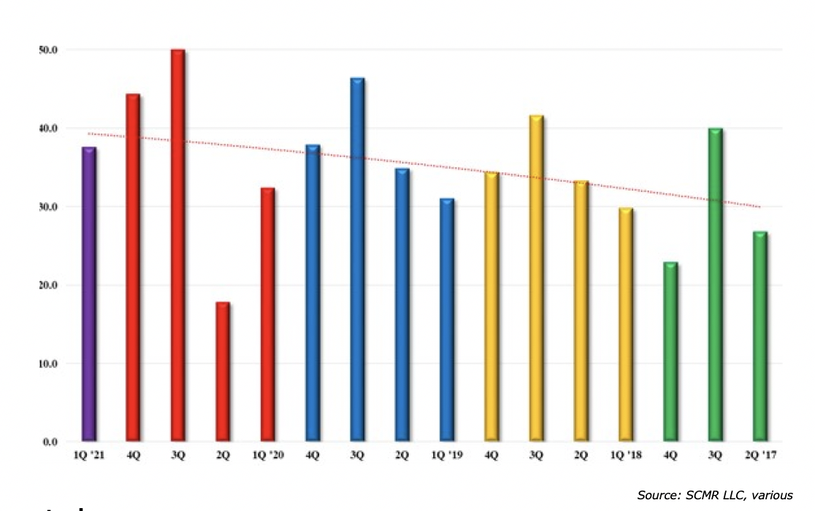