LCD panel prices rose substantially in November, as panel producers remain capacity constrained buyers are forced to pay higher prices to ensure allocation. TV set brands have raised prices, in some cases twice recently, and are negotiating with retailers to share some of the higher costs but will likely not have the option to raise prices again this year.

​Demand remains strong for monitors heading into the holidays as brands push to meet yearly targets, but from a panel producer perspective, monitor panels are relatively less profitable and producers are less likely to shift production to that category, which means monitor panel prices will continue to rise in December.  Notebook panel prices rose again although as the month developed, tales of driver shortages coupled with end-of-year spending began to push up our notebook panel pricing expectations, which proved to be less onerous than we might have expected.  TV panel prices however, continued to rise at an ‘unprecedented’ rate again, far ahead of our expectations, and panel producers do not seem to be hesitant about continuing to push prices further.

Given that TV set demand continues to outstrip production capacity, panel producers are already expecting to raise prices again in 1Q, typically a sequentially weaker quarter.  There is a breaking point at which TV set brands will forego requested panel price increases in order to preserve what is left of margins, and with the increasing cost of TV set panel inventory, we expect TV set producers to become unprofitable relatively quickly.  Does that mean they will stop buying and face losing market share to those that are willing to pay higher prices to see unit volume growth? Eventually, but heading into the holidays it doesn’t seem likely this year, so we expect TV panel prices to rise again in December.

Large panel shipment in October saw the first sequential decline, albeit small, since April and on an overall basis, the large panel display business saw a drop in revenue of 1.0% sequentially. South Korea saw the largest decline as both Samsung Display and LG Display have reduced large panel production, although at a slower pace than originally planned as panel prices rise, while Japan saw the largest increase on low volume, as Sharp is the only real large panel producer. Both Taiwan and Korea have now seen two months of negative sequential growth while China turned positive in October as three of the five main Chinese large panel suppliers had sequential revenue growth. 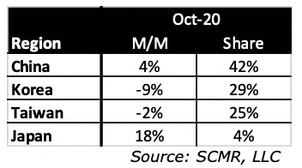 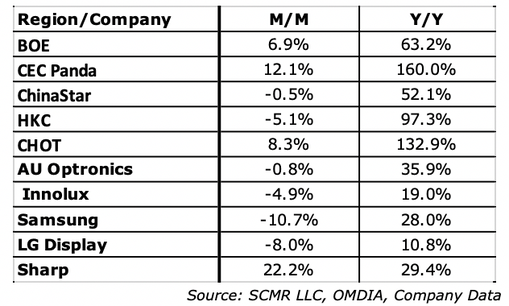