LG, Samsung and other TV makers are planning to launch miniLED-based LCD TVs next year, according to a report The Elec. But it is a stopgap solution. As 8K LCD TVs have failed to generate expected sales, TV makers are reportedly turning their attention to miniLED backlighting in an effort to improve picture quality in high-end LCD TVs. Korean media reported that LG and Samsung are gearing up to launch miniLED LCD TVs in 2021. LG is apparently preparing 4K and 8K "NanoCell" LCD TVs with miniLED while Samsung is expected to offer 55- to 85-inch models, according to analysis firm Trendforce.
- "Samsung Electronics, the world’s largest TV maker by sales, will likely push its miniLED TV offerings. The company has already been pushing its QLED TVs, which are LCD-based, for the past couple of years and miniLED offers a perfect marketing slogan. It will likely launch a QLED miniLED TV," the report said. With miniLED, manufacturers can fit more of the smaller light emitting diodes (100-200µm vs. 300µm for regular LEDs) into the backlight unit behind the LCD panel; typically thousands of miniLEDs compared to hundreds or fewer regular LEDs today. This can potentially improve the efficiency of local dimming. However, more dimming zones lead to higher production costs. 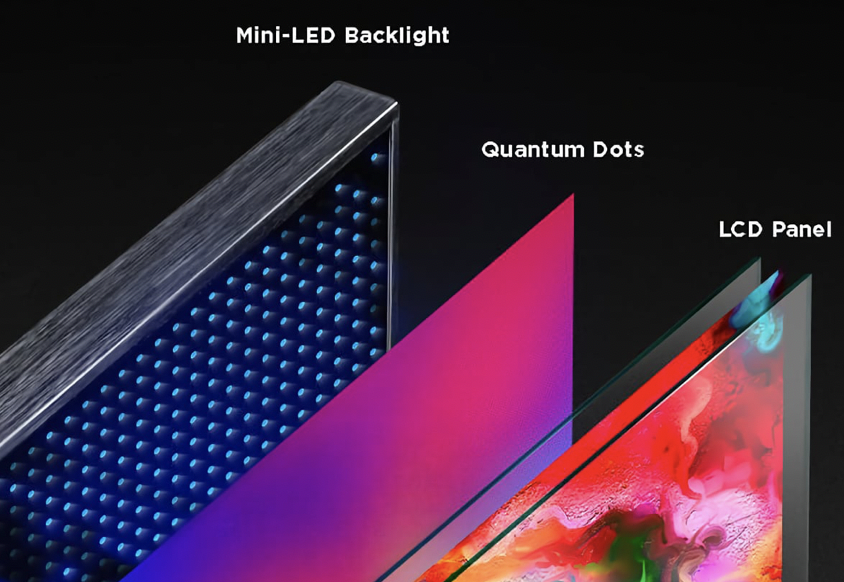 ​Source: TCL
In 2021, LG will continue to position OLED TVs as its premium TVs and Samsung will continue development of QD-OLED and microLED display technologies.

- "Samsung Display’s quantum dot (QD) OLED technology will likely be commercialized after next year at the minimum," The Elec added. MiniLED is widely considered a stopgap until microLED displays, in which each pixel is made up of microLEDs, can be commercialized for the mass market. TCL has already launched the first miniLED LCD TVs with its 8-series (or X10) and 6-series models – without raising the bar for LCD picture quality.  MiniLED LCD TVs will not necessarily be cheaper than OLED TVs either, according to recent analysis by DSCC (Display Supply Chain Consultants).
​
- "MiniLED and OLED will compete in the marketplace, and the cost profile in the two technologies shows they are quite close. MiniLED total costs are lower than WOLED, but the gap is less than 10%. This suggests that MiniLED products will compete at retail price points similar to WOLED," said DSCC.