iPhone SE Supports Growth of Apple’s Services Sector
June 14, 2020
​
Last week, we discussed how Apple positioned the SE to increase its installed base even it meant sacrificing margins in favor of Apple's new services like Apple TV+ and Apple Arcade will keep the momentum going regarding both sales growth to increase the coverage of its offerings (in terms of ubiquitous consumer needs like streaming entertainment options). Apple's cloud computing services support its internal operations and allow for the firm to cater to the needs of third parties as well. In the realm of financial tech, the company launched Apple Card in partnership with Goldman Sachs Group, Inc. (GS) in an attempt to gain a toehold in this lucrative arena.

​With dwindling iPhone, iPad, and Mac sales, Apple's revenue mix is transforming. During the last quarter, Services contributed to ~23% of total revenues, which is higher than the LTM share of ~19%. I think, over the long term, Apple could become a services-centric firm, i.e., it may derive the majority of its revenues from the services segment. 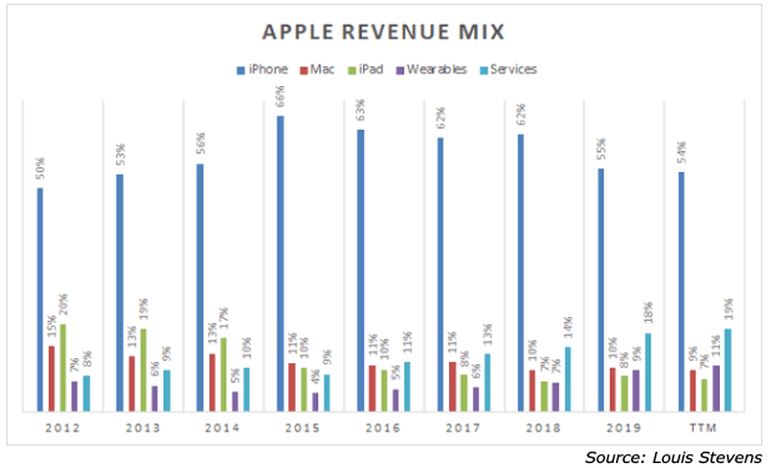 ​Over the last several years, Apple's services business has been the only segment to show continuous y/y growth since 2013. With an ecosystem of ~1.5 billion Apple devices, the services business still has a long runway. 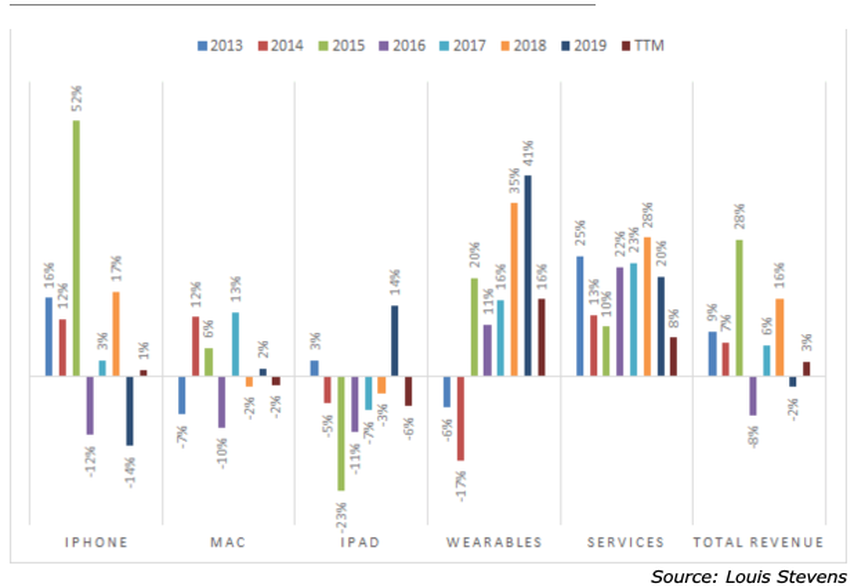 ​The following graphic is a forecast of Apple's revenue growth over the next 4 fiscal years. While the launch of its first 5G-capable iPhone will play a large role in its nearer term growth trajectory, it is Apple's Services segment that will project growth in the long term. 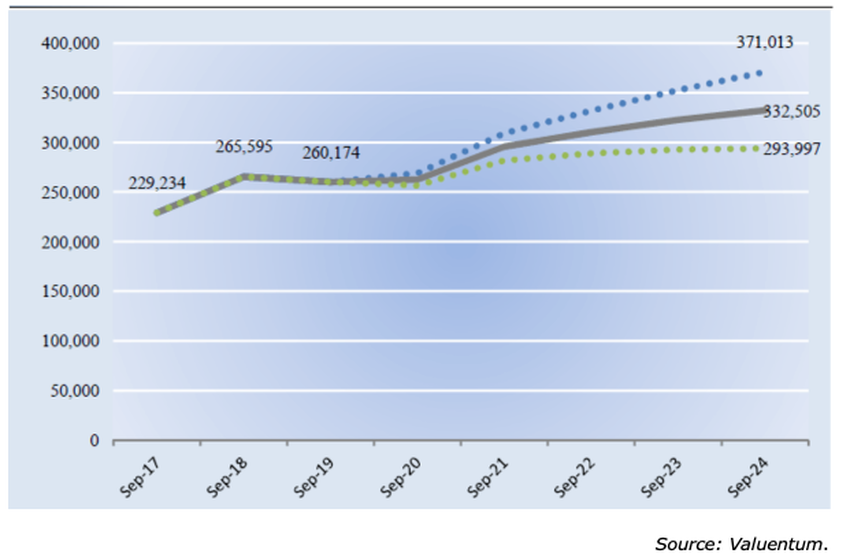 ​Apple’s gross margin was 38.4%, flat sequentially with cost savings and mix shift towards Services offset by the loss of leverage. Products gross margin was 30.3%, decreasing 380 basis points sequentially due to the loss of leverage and unfavorable mix. This drop was more pronounced than under normal circumstances due to the COVID-19 impact. Services gross margin was 65.4%, up 100 basis points sequentially, driven by favorable mix. At the last earnings call, Tim Cook said, “Services set an all-time revenue record of $13.3 billion with strong performance across the board with all-time revenue records in the App Store, Apple Music, Video, cloud services, and App Store search ad business. And we also set a March quarter record for AppleCare. Our new services, Apple TV Plus, Apple Arcade, Apple News Plus and Apple Card continue to add users, content and features while contributing to overall Services growth. Apple's Services segment generated gross margins that were more than double that of its Products segment last fiscal quarter.” From:www.valuentum.com