Corning has raised prices ‘moderately’ for display glass substrates in starting in Q221, saying, “This price adjustment is a result of increased costs in logistics, energy, raw materials, and other operational expenses during the current glass shortage.  Additionally, the cost of precious metals required for maintaining reliable glass substrate manufacturing have risen significantly since 2020. While Corning has sought to offset these added costs with productivity enhancements, it can no longer fully absorb them.”

While borosilicate glass is primarily silica which is highly refined or grown, other ingredients, most of which are closely guarded secrets, include Boron Oxide (made from Borax) and oxides of Sodium, Potassium, and Aluminum.  The price of Boron Oxide has risen by 9.5% over the last 12 months, enough to make a difference given it constitutes between 7% and 13% of borosilicate glass composition, so there is justification for a price adjustment, even at this basic level and the price of rare earth materials has risen precipitously over the last year, also having an impact on the overall cost of display glass production, despite the small quantities used.

A quick look at the spot price of natural gas during the same period is an indicator that the cost of production is rising.  As seen in Fig. 2, the spot price of natural gas has risen 32.6% in what is the last 13 months, and if we go back just one month (Feb.), that increase would have been 67.4%.  With energy accounting for between 14% and 15% of the glass industry’s production costs, just the increased cost of energy would justify higher prices.

As demand increased last year sequential glass contract price adjustments were close to zero, and while the company does not reveal the actual contractual price reductions, large customers (top 4 represented ~74% of sales in 2020) were willing to hold glass prices steady to insure continued supply.  Then the ‘other issues’ came into play, a power outage at NEG’s  plant in Shizuoka, Japan, which shut down the plant for over 5 hours and an explosion at Ashai’s Gumi glass plant (Gen 10.5.).  Given that glass production is a continuous process and that the rapid cooling of a plant’s furnaces can damage the refractory brick that lines the furnace, just the NEG shutdown is expected to reduce industry glass production by 2% to 3%.  While this is a relatively small amount, when the industry is as tight as it is currently such a reduction in capacity can make a significant difference.  In order for panel producers to make sure they have enough glass substrate capacity to meet current demand, they are willing to pay a higher price for production, especially those who are directly affected. LG Display is a key NEG customer, which pushes up the overall price of glass.  This coupled with the increased cost of production makes Corning’s price increase, which could be as much as 3% to 4%, a no-brainer, and panel producers will likely be willing to pay it despite the lack of precedence. 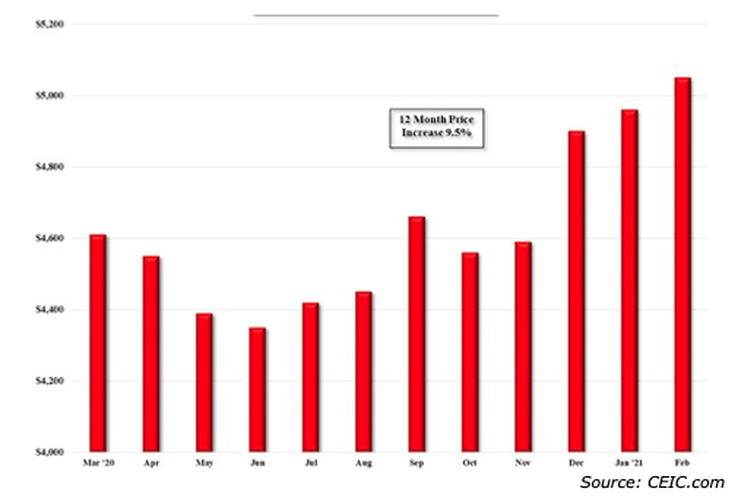