Impact of the Corona Virus to the Display Industry
February 09, 2020

China’s Coronavirus has reached a staggering 35,000 plus cases and ~600 fatalities. Infection rates are not slowing down and cases are propping up all over the world.  A total of 24 other countries had confirmed at least 216 infections in total, including 12 in the U.S. and 28 in Singapore as of Thursday morning. While a very serious condition, in perspective, there could be bit of over-reaction.

There is nothing positive about this table and the Coronavirus is just getting started, but it’s not panic time. The solutions will be forthcoming!

China is not only the largest supplier of displays it is also the major source of CE and the largest market for smartphones and TVs. What follows is an assessment on the impact of China’s supply and demand that will have global implications.

In its semiannual report to Congress yesterday, the Fed warned that the outbreak presents a “new risk” to the economic outlook for the U.S.
Looking at the Display industry; Apple analyst’ Kuo said that iPhone supply is being affected by the Coronavirus causing 1st quarter to drop by 10% to 36-40m vs. 42m in Q119. Foxconn said it could take two to three weeks from now to resume full production due to the coronavirus outbreak.  Smartphone shipments in China are likely to fall off a cliff in the first quarter of 2020 due to the coronavirus outbreak, according to industry Media Tek that put the drop at 15% Y/Y. A delay in the resumption of operations could have an impact on the global technology supply chain and shipments to Foxconn’s customers, including Apple.  “Roads are closed in some parts of the country. Nobody knows for sure if some workers could get back in time,” and the company’s top management describes a “chaotic” situation as it scrambles to meet different requirements for the resumption of operations set by various local governments across China.

Wuhan BOE B17, CSO, which account for just under 50% for large panels and around 50% for small and medium- sized panels on a surface area basis, but the actual impact will likely be particularly big for large LCD panels, which could be a positive indicator for Taiwanese suppliers. There are five manufacturing facilities in Wuhan: Tianma’s G4.5 LCD and G6 OLED plants, CSOT’s T3 (G6) LTPS-LCD and T4 (G4) OLED plants, and BOE’s B17 (G10.5) LCD plant. Both Tianma’s and CSOT’s OLED plants are still in the startup phase for mass production, while BOE’s plant is about to start MP, and there will likely be no impact on the supply-demand balance for the near term. Two smartphone-oriented facilities, Tianma’s G4.5 (A-Si) plant and CSOT’s T3 (G6) plant, supply a large volume of panels to Samsung Electronics and others. In addition, BOE’s B17 plant, their second G10.5 facility, could have an impact on the supply-demand balance due to its large monthly capacity of 120,000 units.  FPD plants in China are basically making progress on automation of front-end manufacturing (TFT, OLED processes), and while these still operating even in Wuhan, in accordance with a government ordinance there are plans to lengthen the Chinese New Year holiday and recommence operations from 10 February for back-end (module) work, an extension of just over a week. The main issues at the front end are whether procurement can restart before component and materials inventory runs out, whether production can be maintained without bottlenecks (materials procurement from overseas will likely be particularly tough), and whether companies can find places to store goods in progress after production. At the back end, issues include whether a sufficient number of operatives can be secured for 10 February, and, as in front-end work, whether procurement of necessary materials is possible. These issues will affect all assembly plants across China for finished products, including TVs and smartphones. Although there are no large TV or smartphone plants around Wuhan, given the possibility of operational restarts being postponed (by government ordinance), we believe it is over-optimistic to expect that all components and materials can be sourced swiftly even once operations do start. For example, iPhones are mostly manufactured at Hon Hai group’s Zhengzhou plant, 500km away from Wuhan, and even if all workers can return to staff the operational restart, there is no guarantee that components and materials can be brought in from China and overseas. It will likely be difficult to immediately return to full operations even after the spread of the epidemic peaks out and people and goods can flow freely once more, which is a risk for the launch of the SE2 iPhone, mass production of which was planned for after the Chinese New Year, may be delayed. For Chinese smartphone brands, on the other hand, given the recent trend toward excess inventory for the domestic market there are also possibilities that production plans for 4G models may be further revised down (for 1Q and 2Q) and that the timing of some 5G model launches may be changed (for 2Q and 3Q).  The original plan for BOE’s B17 was to begin mass production in the December 2019 to January 2020 period, but that has been delayed due to the oversupply of 65” and 75” LCD panels. In addition, as the technical support teams from major equipment makers that had been staying in Wuhan (including those from Japan and the US) are returning home, the start of this process could be delayed a couple of quarters and begin mass production would begin the latter part of 2Q or 3Q 2020. Tianma’s G6 OLED and CSOT’s T4 (OLED) plants had planned to begin phase 2 of equipment installation (from 1Q and 3Q respectively), and these could also be delayed depending on the response of equipment makers.

Source: Mizuho Securities Equity Research ​
Demand Side
The Chinese domestic market accounts for around 20% of the demand for the key display application areas such as TVs, smartphones, and PCs on a volume basis. Possible factors that could cause decline in demand include: 1) worsening in economic conditions (fall in incomes); 2) deterioration in consumer sentiment; 3) supply side issues (including an inability to manufacture in sufficient volumes, narrowing of product ranges, and increase in sales prices to reflect higher component costs); and 4) logistical problems (such as inability to deliver purchased items, even those bought online). The impact may be particularly large on TVs and PCs, which have longer product lives than smartphones. There is a possibility that an economic downturn might spread to other countries and depress global demand pushing down to its natural level, and providing that this epidemic does not trigger a longer-term and more pandemic economic reversal, the impact on the demand side will basically only run until the epidemic dies down.

Large panels  -- A significant improvement in the supply-demand balance for large panels caused in part by shuttering of factories by South Korean makers slowing in supply growth (or even forecasts for a slowing) due to the epidemic could cause tightening in supply-demand conditions in the near term, and may cause panel prices to rise more than had been expected through April. As panel makers have been weighed down by large operating losses, there is a strong possibility they could adopt a more aggressive approach and look to frame price increases as “price corrections” rather than price hikes that take advantage of conditions. Moreover, there is a possibility that panel demand may decline in unexpected ways, as operations at the Chinese factories of LCD module and TV makers will also be affected, and it may not be possible to make as many units as planned owing to issues procuring components and materials from China. Overall, we see no change in the likelihood of tighter conditions in 1H and looser conditions in 2H, but there is a chance that the epidemic might increase the scale of these fluctuations.

Small and medium-sized panels -- In small and medium-sized panels, the key element for OLED panels is whether there is a major impact on production at BOE’s B7 plant in Chengdu and B11 plant in Mianyang (which supplies large volume to Huawei). For LTPS LCD panels, the main issue is CSOT’s T3 plant in Wuhan that supports Samsung Electronics (CSOT supplies panels for more than 50% of the panels for its LCD models, with the rest coming from BOE). Should there be a major disruption to production at plants which supply a large number of manufacturers, including Chinese and Japanese brands, such as Tianma’s G5.5/G6 plant in Amoy and BOE’s Ordos G5.5 facility, there is a possibility of a temporary tightening in supply-demand conditions for LTPS panels. There is also the possibility that panel demand will decline as OEMs reduce sales and production plans, as they hold larger inventories for smartphones in China than they do for TVs. For iPhone panels, Chinese panel makers are not involved in supply (BOE may supply OLEDs, but the volume is too low to have any impact), while for the iPad BOE only supplies a portion of panels for the iPad Air, which could be switched to Sharp. However, this only considers front-end manufacturing, and both JDI and Sharp conduct back-end processing in China, and while South Korea makers do their work in Vietnam, they are heavily reliant on components from China; therefore, the key factor is likely to be the ability to secure the necessary back- end materials. 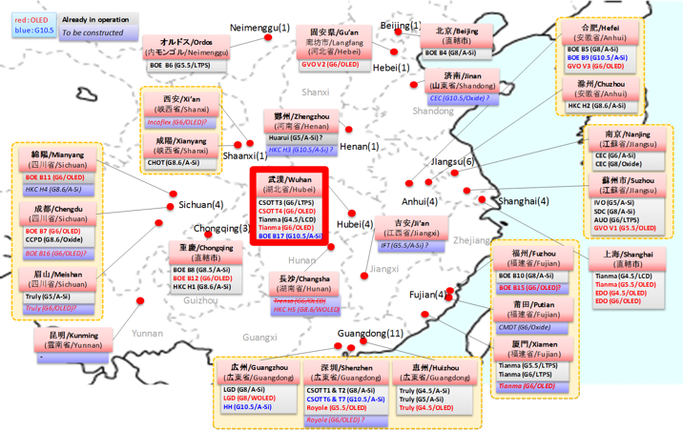