Emissive displays degrade due to the drive current causing a drop in emitted photons on the material. The problem for LCDs is that they work by applying a charge to the molecules of LC material to control the light going through the material. Over time, the molecules can start to build up a residual charge and start to mis-align from their optimum positions, changing the light transmission. In addition, the backlight ages and LEDs have catastrophic failures od ~10% over a 5-year period
Ideally, panel makers should specify how their displays perform under conditions that induce image sticking and set makers should specify their measurement requirements.
​
The original IDMS V1.03 had a test to measure 'Residual Image' performance but it was based on test patterns that were monochrome, using a checkerboard pattern. That was fine for LCDs because the sticking was not related to a specific color - the same LC material was controlling every pixel. However, a challenge for OLED is that the materials for red, green, and blue are very different in performance and lifetime, with blue especially weak still. 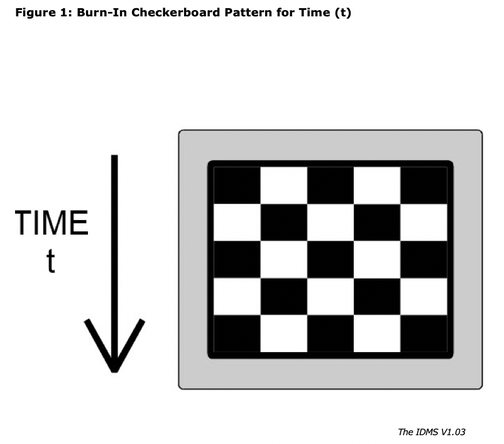 ​A second issue is that there are both short term and long-term sticking effects. Emissive display burn-in tends to be long term but LCD effects can be both short term and long term. The burn-in process is typically mitigated by making the burn 'even' between the different colors, but LCD sticking can sometimes be reversed by applying voltages to reverse residual charging effects.
The new IDMS standard introduced last week (ICDM Has IDMS V1.1 and Other Acronyms) has addressed these issues. The first change is in section 10.8 'Color Residual Image Methods'. The new procedure sets out a sequence of different color chequerboard patterns that are designed to include some fixed colors and some variable colors on different parts of the display. 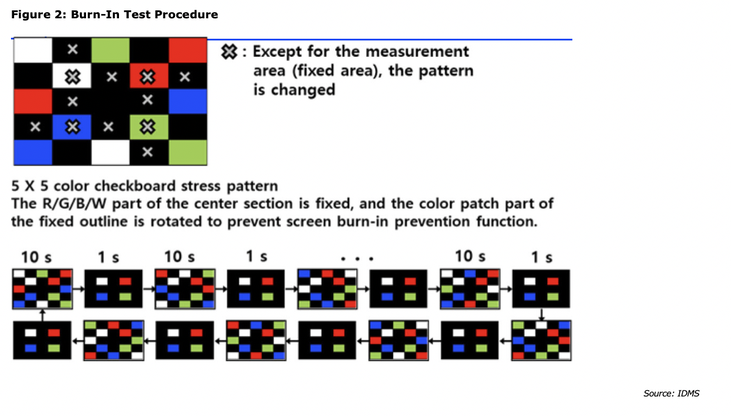 ​The new IDMS V1 1 patterns include fixed and changing patches.
As well as the longer term test (10.8.2), there is a short term test (10.8.1). The procedure takes account of the need to warm up the display to working conditions before testing. The process also sets out the speed needed for making the tests before effects 'wear off'.
Those tests consider the needs for non-video displays, but for TV and other displays showing video, the kinds of signal level and images are quite distinct, so Chapter 10.9 of the new standard describes procedures to measure video-related image retention and specifies the use of standardized video content. TV also includes fixed images such as channel logos and idents, so pattern tests are also specified in the standard and an option is given to include a specific logo in the test. Makers have developed technology to mitigate image retention, so the standard allows these to be used and reported to make the tests more realistic to how TVs would be used.
The IDMS is available for free download here. (BR)