Huawei warned that 2020 would be its most difficult year yet due to American trade restrictions which dealt a blow to its overseas sales in 2019, and predicted the Chinese government would retaliate against the United States by restricting sales of American products in China and by shifting to alternative suppliers in China and South Korea. The U.S. is preparing further measures seeking to restrict the supply of chips to the company to curb sales of chips to Huawei by Taiwan Semiconductor Manufacturing Co., a major producer of chips for Huawei’s HiSilicon division.  “If this curb happened, Huawei and also other Chinese companies could … buy chipsets from Samsung from Korea, MTK from Taiwan, and [Unisoc] in China, and use those companies to develop chips,” Huawei’s Xu said.

Huawei Technologies reported net profit for 2019 of 62.7 billion yuan ($8.9 billion), up 5.6% - its weakest growth in three years, and down from the 25% jump a year earlier. Its carrier business, which includes 5G mobile network equipment, saw sales rise just 3.8%. Overall revenue rose 19% to 858.8 billion yuan, helped by a 34% jump in sales for its consumer business unit, which includes smartphones, mainly driven by China, where sales surged 36.2% to 506.7 billion yuan. In contrast, revenue from the Asia-Pacific region excluding China fell 13.9%, while in Europe and the Middle East sales grew just 0.7%.  Huawei smartphone sales in China, had a 38.5% share in 2019 compared with 27.0% a year earlier, according to Canalys.
Huawei’s revenue grew by 19.1% Y/Y to around $121 billion, but the company says those numbers would be far higher if the United States had not cracked down on its ability to do business. The company isn’t allowed to buy new laptop processors from Intel, and flagship phones like the P40 and the Mate 30 Pro can’t offer Google’s apps or Google’s app store, making them nonstarters for many customers. “That gave us a quite a big difficulty” in growing smartphone sales, Pang said.

Though the trade ban has yet to go into full effect, it’s likely to remain an obstacle for the foreseeable future. The US government “is not willing to talk with us” about removing the trade ban, said Andy Purdy, Huawei’s chief security officer. “We hope at some point we can participate in those conversations.” Huawei also said growth in enterprise businesses, like servers, which rely on Intel chips, and big data analysis, which relies on those servers, is hurt being hurt by the ban.

Huawei is still using components made by US companies in its newest flagship smartphone, a XY Zone teardown has found, despite the US all but blacklisting the Chinese telecoms equipment manufacturer.
The FT took apart a Huawei P40 Pro phone as well as last year’s P30, released just before US sanctions hit, for comparison. The teardown was done by XYZone, a Shenzhen-based company that disassembles smartphones and identifies the suppliers of their components. Phone makers sometimes use different components in different batches of the same smartphone, and the XYZone teardown was modeled on the earliest available copy of the P40. 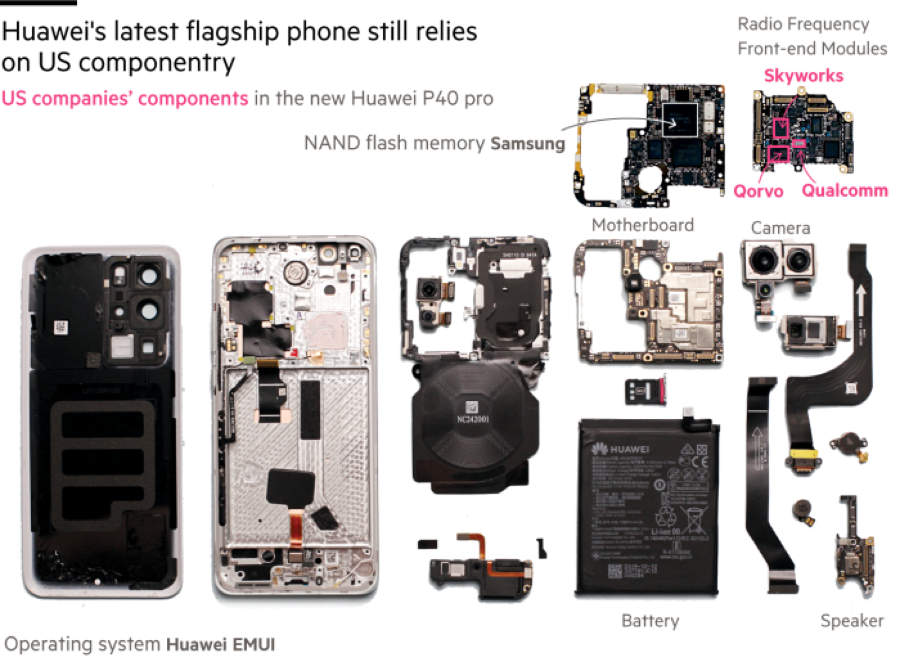 The P40’s radio-frequency front-end modules were, according to XYZone’s teardown analysis, produced by Qualcomm, Skyworks, and Qorvo, three US chip companies. RF front-end modules are critical parts of the phone that are attached to the antennas and required to make calls and connect to the Internet. The Qualcomm component is covered by a license from the US Commerce Department, according to a person familiar with the company. Qorvo and Skyworks did not respond to requests for comment. “Huawei has shown resilience by replacing many US components over the course of a single phone-design cycle. Its continued use of Qorvo and Skyworks chips also shows that it’s too difficult to break dependence on US technology,” said Dan Wang, technology analyst at research firm Gavekal Dragonomics. RF front-end modules are a form of analogue chip, a sector in which the United States still has dominance, Wang said. “As the US debates tightening sanctions on Huawei, the company’s resilience will be tested more severely in the coming year,” he added. 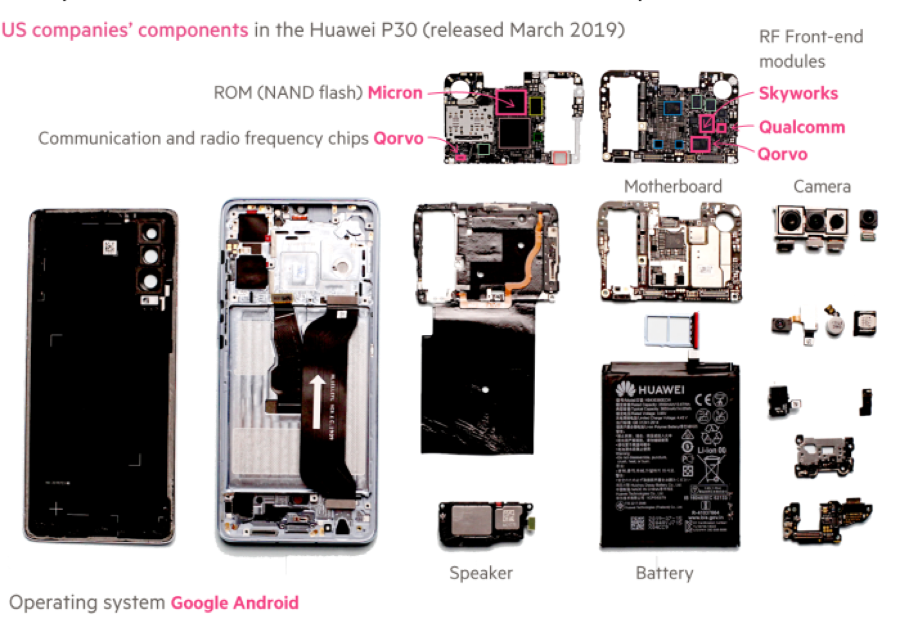 Source: XYZone
The RF front-end modules in last year’s P30 also came from Qualcomm, Skyworks, and Qorvo, whose stock prices plunged on news of US sanctions against Huawei. The “Entity List” designation means that US companies have to apply for a license to export any US-origin technologies to Huawei. The US government has granted a “temporary general license” to its companies, allowing them to sell to Huawei to service existing products—helping clients such as telecoms carriers that may need to replace parts of their wireless equipment. But the general license does not cover sales for the purpose of making new products, such as the P40 smartphone. For that, companies must seek individual licenses, and the Department of Commerce has not said which ones it has granted them to. A spokesperson for Huawei said the company has “always complied with any export control regulations of various countries, including the United States” and that “all the product materials are obtained legally from our global partners, and we insist on working with our partners to provide consumers with high quality products and services.”
​
Other notable changes from last year include the potential disappearance of US chipmaker Micron from the P40 Pro—or at least from the batch that the FT received. Micron made the storage devices called NAND flash memory chips for some batches of last year’s P30 smartphone, and South Korea’s Samsung made the same chips for other batches. The FT’s copy of this year’s P40 Pro appears to have only Samsung NAND flash memory chips. Both the P30 and the P40 are largely made of components manufactured and assembled by Chinese, South Korean, and Taiwanese companies, with only a small fraction of the overall value of components originating from US companies. Yet US companies have historically held strategic chokepoints on Huawei’s phones, from the Android operating system to RF front-end chips and the chip architectures by Arm Holdings, which formed the basis of Huawei’s in-house chip design unit HiSilicon.