Huawei’s  Mate 40 series will arrive as scheduled and reports indicate, the company is working on a range of products including the next-gen Mate X foldable device., which will adopt the Fold’s inward folding mechanism. Displays are expected to come from Samsung and BOE. According Evan Blass, it is codenamed Teton. Ross Young from DSCC also said that the Mate X2 will have inward folding display. A patent filed at EUIPO showed a similar form factor to the older Mate X and had a vertical sidebar with a secondary display. It also showed an inward folding display with stylus tucked underneath the vertical housing on the side. 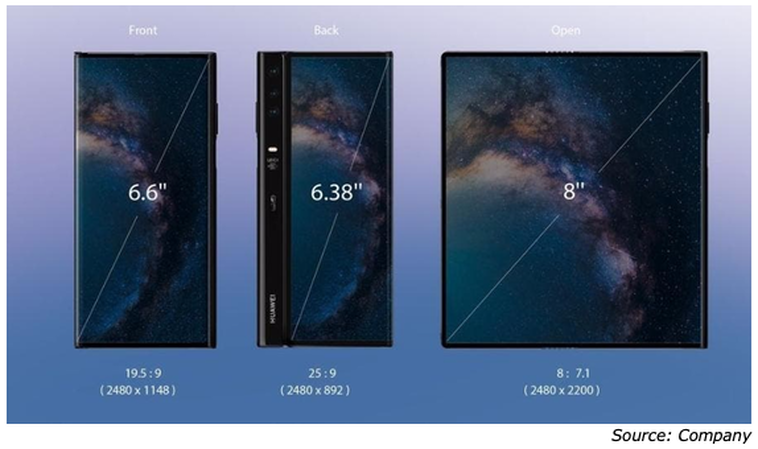 If BOE is one of the suppliers, it indicates the company yields and quality are getting better. BOE recently received orders for on-cell OLED displays (their version of Y-OCTA) for the Mate 40 series. Ross also pointed out that Huawei will use CPI and not UTG for the cover lens even though 30㎛ UTG is more durable and scratch resistant than CPI which is prone to scratches and dents easily. Although it was rumored that Huawei would adopt UTG, the only current supplier is Samsung’s captive Dowoo Insys.  Blass also revealed codenames for devices like Nova, Y9a, FreeBuds Pro and Watch fit which is likely the next smartwatch from Huawei.

The Mate X2 smartphone will reportedly differ from previous models, as the display will fold inwardly, similar to the Galaxy Fold and the recently introduced Z Fold 2.
​
It is reported that the displays for the new Huawei will be supplied by Samsung and BOE. The refresh rate of the main screen will supposedly be 120 Hz. The new Huawei foldable was shown on the website of the European Union Intellectual Property Office (EUIPO). Judging by the patent illustrations, the device will receive a dual front camera and a quad rear camera. An auxiliary screen in the form of a vertical bar will be located in front. Users will be able to interact with the gadget using a special pen.