Huawei Stung by New Restrictions on Semiconductor Foundries
May 24, 2020

It’s been one year since Huawei was placed on the U.S. Commerce Department’s Entity List, barring U.S. based companies from doing business with Huawei and its fully-owned subsidiaries. That ban has never been in full effect as the U.S. keeps extending Huawei’s Temporary General License, allowing them to keep their licenses to distribute Google Mobile Services on devices introduced before the ban. The main result of that ban has been that Huawei can’t ship new smartphones (even under its Honor sub-brand) with Google Mobile Services, and that will remain true until at least May 2021. Now, the U.S. Government is escalating trade restrictions even further by moving to block many chip makers from supplying HiSilicon Kirin SoCs to Huawei. The stiffer restrictions will force foreign chipmakers using US equipment to halt shipments to Huawei. Chipmaker TSMC has since halted all orders for Huawei, according to Nikkei Asian Review. Those orders already in production and those orders which TSMC took before the new ban are not impacted and could continue to proceed if those chips could be shipped before mid-September.” TSMC is responsible for producing the vast majority of the manufacturer’s smartphone chips, such as its Kirin family. Some of the more prominent chips include the Kirin 990 used in its flagship wares and the Kirin 820 used in its mid-range 5G phones. Losing access to TSMC is a major blow for Huawei, as it’s not quite a simple case of switching to another company. Few companies can produce the <6nm feature sizes on a scale needed by Huawei, and these firms would likely be using US equipment as well. Recent decisions from TSMC point to its attempt to strengthen bonds with the U.S. though, as it’s planning a new $12 billion advanced chip factory in Arizona with support from the state and the U.S. federal government.  TSMC will build and operate a 5nm wafer fab with monthly capacity designed for 20,000 wafer starts. Construction is planned to start in 2021 with production targeted to begin in 2024. TSMC also has plans to build new 5nm process capacity in Taiwan, where its major operations are located. It remains to be seen whether its 5nm fab investment in the US will affect its ongoing expansion project at its new Fab 18 in the Southern Taiwan Science Park (STSP). In addition to TSMC, the restrictions include top Chinese contract chipmaker Semiconductor Manufacturing International Co. and Win Semiconductors, a manufacturer of radio frequency chips. Win's support is crucial for Huawei to cut its reliance on American suppliers Skyworks and Qorvo, a legal expert said. Harry Clark, a Washington-based trade law expert and managing director of American law firm Orrick, said that chip contract manufacturers outside the U.S. will have to apply for a license for any shipments that do not meet the necessary criteria. Violating such laws, he added, could leave a company "exposed to substantial penalties" imposed by the regulators. Huawei traditionally debuts a new flagship processor in September or October each year inside the Mate phones. If any Kirin chip is going to be affected by this US measure in 2020, it’ll likely be this processor. The Chinese brand has also recently shipped phones with a brand-new Kirin 820 5G chip, but it likely ordered plenty of these for future devices. Huawei also uses Qualcomm and MediaTek processors in some of its phones, but these chip designers use TSMC to produce their chips. Huawei has also been stockpiling components since the end of 2019, Nikkei reported, in order to ensure a steady supply. The new constraints has the potential to cause considerably more damage than the lack of Google services.

Huawei’s rotating chairman Guo Ping admitted that while the firm is able to design some semiconductor parts such as integrated circuits (IC), it remains “incapable of doing a lot of other things.” “Survival is the keyword for us at present,” he said.
​
Huawei stated the latest U.S. ban would not only affect its own business in over 170 countries, where it has spent “hundreds of billions of dollars,” but also the wider ecosystem around the world. “In the long run, [the U.S. ban] will damage the trust and collaboration within the global semiconductor industry which many industries depend on, increasing conflict and loss within these industries.” Huawei said at the summit that it had doubled down on investment in overseas developers in an effort to lure them to its operating system. Some 1.4 million developers have joined Huawei Mobile Services or HMS, a 150% jump from 2019. For comparison purposes, iOS in 2018 counted 20 million registered developers, who collectively made about $100 billion in revenues. The question for Huawei is how much money app makers can generate from its ecosystem. In its search to identify alternatives to Google’s app suite in Europe, it has partnered up with navigation services TomTom and Here, search engine Qwant and news app News UK.

As a very volume limited replacement source for TSMC, China’s state-backed funds pumped $2.25 billion into a Semiconductor Manufacturing International Corp. wafer plant to support advanced-chip making as Washington tightens technology restrictions on the Asian nation. SMIC has just moved its most-advanced 14nm FinFET process to commercial production. The node accounted for only 1.3% of SMIC's total wafer sales in the first quarter of 2020. TSMC, on the other hand, has already kicked off volume production of chips using 7nm and 5nm EUV process technology for HiSilicon, the observers noted. The Semiconductor Manufacturing International Corp. plant’s registered capital jumps from $3.5 billion to $6.5 billion after the investment, the company said in an announcement last Friday. The chipmaker’s stake in the Shanghai facility will drop from 50.1% to 38.5%, it said. The plant has capacity to produce 6,000 14-nanometer wafers a month and plans to boost that to 35,000. SMIC is planning a Shanghai share sale that could raise more than $3 billion, based on its closing value of more than $13 billion last Friday. But the local technology falls far short of the current needs of Huawei.

Figure 1: Huawei at a Glance 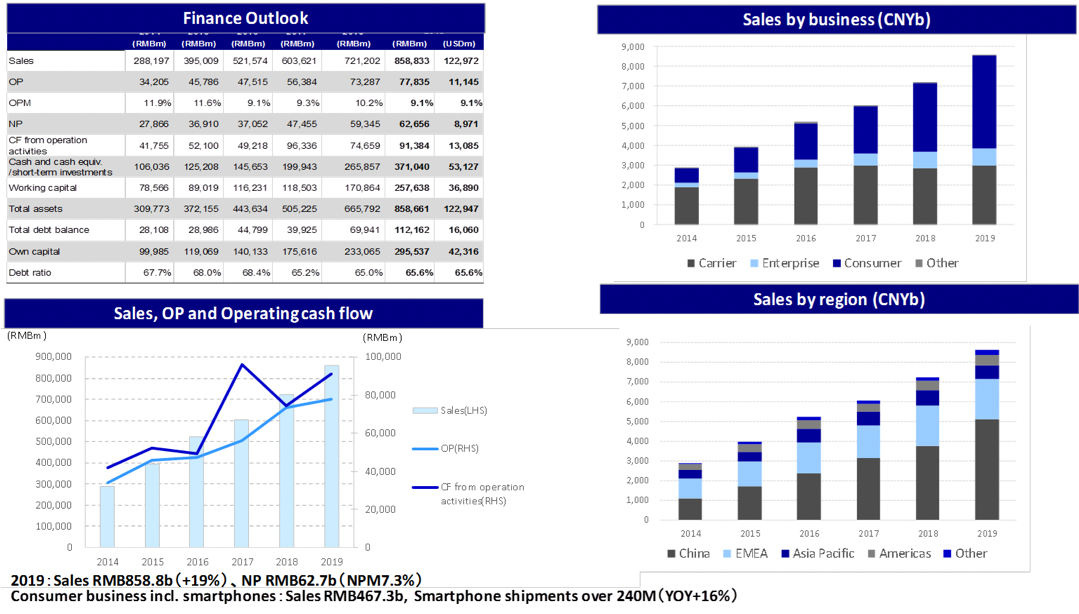