Vertical Divider
Huawei P50 Launch Is Confirmed for July 29
​
We reported on a Weibo leak hinting that Huawei's newest flagship lineup—the Huawei P50 series—would be launched at an event held on July 29. That rumor has just been confirmed, straight from the company (thanks to MyFixGuide). The new series, likely consists of the Huawei P50 Pro, Huawei P50 Pro, and probably a Huawei P50 Pro Plus.

The launch of this series will be the first of Huawei's devices to be originally shipped with its in-house operating system, Harmony OS that is built on a distributed operating system architecture to work across different devices and it’s a part of Huawei’s all-scenario strategy," claims Huawei on their website. "This new OS is adaptable to a mobile office, fitness, and health, social communication, media entertainment more." Huawei promised it will be updating around 100 of its devices to run Harmony OS last month, including the Huawei P40 series, the Mate 40 series, the Mate 30 series, and more. The company is hoping to have over 100 million active HarmonyOS users as an end goal.

The P50 lineup is expected to feature the Snapdragon 888 Pro, instead of the 5nm
Kirin 9000 because the US ban made it impossible to produce enough ICs to meet the demand. Huawei's P50 model has 6/8GB of memory and 128/256GB of storage.
​
The P50 lineup may also feature different display curvatures, with the base P50 model sporting a less curved glass, nearly flat on the sides (much like the Galaxy S20 and S20+), while the P50 Pro will sport a waterfall display with aggressive curved sides (similar to the Mate 40 Pro). The P50 Pro Plus reportedly carries a quad curved display. 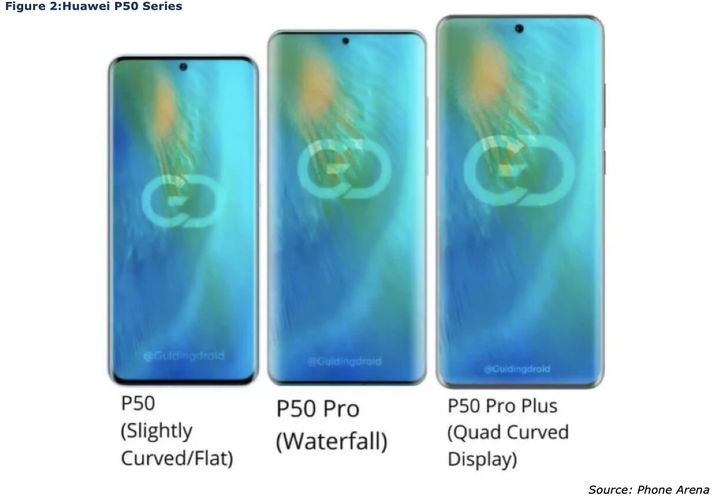