According to xda developers, Huawei has nailed basically every aspect of the hardware.  Huawei calls the new hinge design “Teardrop” which describes how the screen curves to avoid showing a crease. It’s made of a zirconium-based liquid metal that Huawei says is twice as strong as on the Mate Xs. The hinge motion feels sturdy but doesn’t allow fixing the phone at any angle. Instead, it snaps to either the fully unfolded or fully folded state whenever the hinge angle is nearly 0° or 90°. The snap really helps with fully folding and unfolding the device and relieves some of the pressure that the user may place on the device in trying to get it to fully fold or unfold. 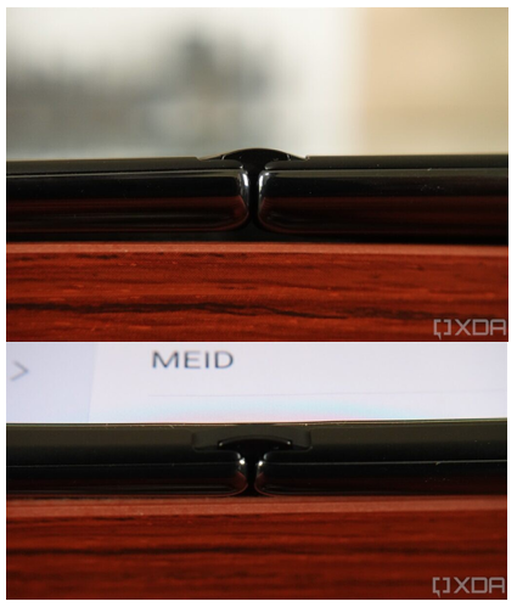 ​Source: XDA -Developer
​When the two parts are closed, they’re held together magnetically. There’s some noticeable tension that needs to be overcome to pull the two halves apart. Two hand are generally needed to fold and unfold the phone. There is virtually no gap between the two displays. Contrast that to Samsung’s foldable which has a gap of air between the two screens since they don’t perfectly stack on top of one another. Huawei’s solution is an asymmetrical wedge design. The Huawei Mate X2 is shaped like a wedge, where one half is slightly thicker than the other half, allowing the two halves to stack on top of each other with no gap between them.

​Source: XDA -Developer
​The thicker half houses the main internal components, including the Huawei Mate X2’s single, large 4,500mAh battery, quad-camera setup, SoC, buttons, and USB-C port. (Side-note: there’s also an IR blaster, which is a rarity these days, and a fingerprint scanner embedded in the power button that is super responsive.) The thinner half features the outer display, both speakers, and the hybrid nano-SIM card + NM card tray.

Summary of the Positives

Summary of the Negatives