Vertical Divider
Huawei Gains Market Share in Telecom, Despite US Restrictions
​
Ericsson and Nokia should be the primary beneficiaries of the US’ Foreign Direct Product Rule (FDPR) that directly affects Huawei ability to source ICs made with US originated semiconductor tools.  Nokia is expected to replace Huawei Technologies in British 5G networks following a deal with UK telecoms giant BT.  The deal will allow EE network users to access 5G, 2G, 3G and 4G networks via additional base stations and signal antennas across the country. Yet Huawei continues to increase its market share despite efforts to the contrary. In theory, Huawei losing contracts at the urging of the U.S. government should bode well for the competition. Assuming they are able to execute, a number of companies stand to benefit by winning contracts that would otherwise have gone to Huawei. Ericsson and Nokia are the only other companies that offer a full 5G solution, but , Cisco, Ciena and Samsung compete as well. These companies are the main suppliers of telecom gear together with Huawei and ZTE, both from China. The telecom equipment market encompasses a number of verticals, including broadband access, optical transport, routers and Ethernet switches for service providers, core and radio access network. Not all of the aforementioned companies compete in every segment.

According to Dell'Oro, Huawei continues to increase its worldwide share of telecom equipment revenue. Huawei's market share has increased by three percentage points Y/Y to 31% in 2020. Huawei's market share was 20-21% in 2014. In contrast, Ericsson and Nokia’s share fall during this time frame. Nokia has shrunk by a third to about 14-15% and Ericsson has lost 3% to 14%. Excluding Huawei, ZTE is the only other company to have made substantial gains. ZTE managed to increase its share from 9% to 11%. At the other end of the spectrum is Cisco, which has seen its share decrease to 6%. The remaining companies are about flat in the low single digits as shown in the next figure. 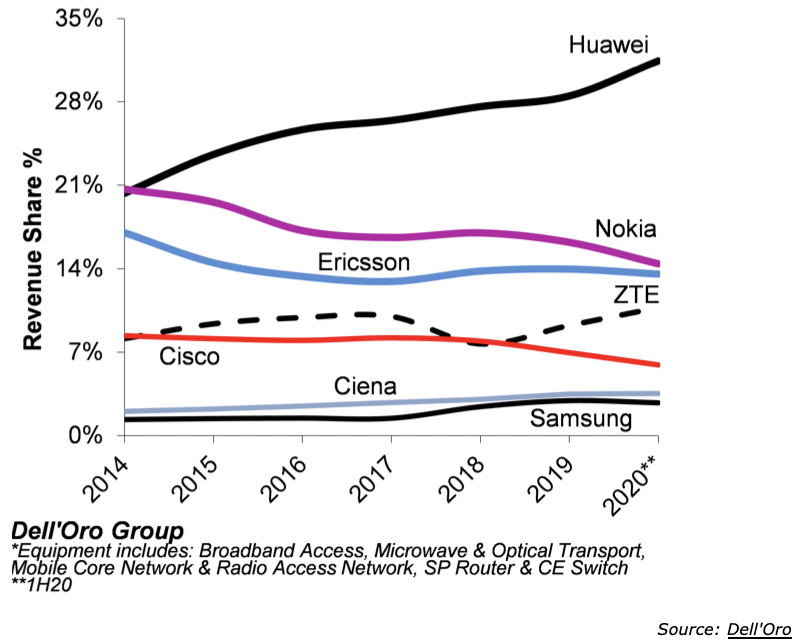 ​Huawei, Ericsson and Nokia compete head to head, but Huawei separated itself from the rest of the pack. Huawei is now bigger than Ericsson and Nokia combined. What's even more remarkable is that Huawei has been able to do this against a backdrop of determined U.S. opposition, which includes U.S. government sanctions. Huawei is more resilient than anticipated because China is the largest 4G and 5G market and Huawei is the leading supplier of telecommunications equipment in China. Huawei Technologies, the Chinese tech giant at the epicenter of the US-China tech war, said it has enough chips for its communications equipment businesses but not for its smartphones, and is looking to buy new supplies from US companies provided they can gain the relevant licenses from US authorities. “Our stock of chips for our enterprises business is adequate, but the company is still looking for ways to address the chipset problems for smartphones as Huawei consumes hundreds of millions of smartphone chipsets every year,” said Guo Ping during Huawei Connect 2020, the company’s annual event for the global ICT industry. “Qualcomm’s chips will be used on our smartphones if they get a license from the US government … Qualcomm has always been our local partner, and has supplied us with chips for over a decade,” he added.

According to Ericsson's CEO, "China today has 60% of the number of base stations in 4G of the total world market." So by virtue of being number one in a market as big as China, Huawei is able to occupy a major share of the global market. Huawei can use China's size to climb up the ranks, even if its ability to do business in other countries is interrupted. China is spending heavily on upgrading its telecommunications infrastructure for 5G to reach 600,000 5G base stations by the end of 2020, almost five times the number last year. The scale of infrastructure investment has given Huawei an advantage because it gets the lion's share of contracts. But ZTE has also done well in recent times.
A third factor is that China has seen less disruptions due to the COVID-19 pandemic compared to many other countries. In other places, a weakening economy and delays in infrastructure spending have affected companies and caused revenue to be less than expected. For instance, the 5G rollout in some countries has been postponed until the pandemic is under control. All of these factors have played a role in determining the global rankings of equipment suppliers.

Huawei stocked up on ICs to combat the US restrictions as TSMC, Samsung and Hyundai stopped selling to Huawei. Telecom equipment typically uses chips with a relatively long life cycle, which don't necessarily require leading-edge processes. However, the UK claimed that cancelled their agreement with Huawei because the company did not have access to the latest technology, Ericsson and Nokia could gain market share simply because telecoms have no other choice than to replace Huawei.