Huawei annually introduces a large number of smartphone models from cheap budget phones to high-end devices, The company is expected to introduce its first HarmonyOS smartphone, presumably the Huawei P50 series. Just as the Huawei Watch 3 was recently announced, as the first HarmonyOS smartwatch. The company has been extremely innovative for years. On December 15, 2020, Huawei Technologies filed a design patent with the China National Intellectual Property Administration (CNIPA) for an unknown Huawei smartphone . The documentation was released on July 9, 2021. The mobile phone has a flat screen with  no notches or holes in the screen, suggesting it has an under panel camera (UPC).

Two buttons have been incorporated into the design on the right side of the phone. The frame is slightly wider at the height of the buttons and the receiver is directed upwards, instead of forwards. There is a 3.5mm headphone jack on the top, as well as a microphone. A microphone is also visible at the bottom, as are a USB-C connection and a speaker. There is a triple camera visible in the rear, which is placed vertically in the top left corner. Directly below the triple camera is a round flash, which are placed together in an oval-shaped camera island. The camera design is very similar to the expected Samsung Galaxy Z Fold 3 , but also to the recently introduced Honor X20 SE. The design of the rear camera varies by model. For example, Huawei has recorded a variant in which the camera lenses are placed on the left side of the camera island – leaving room for some text on the right side. However, there is also a variant where the camera lenses are centered on the camera island. 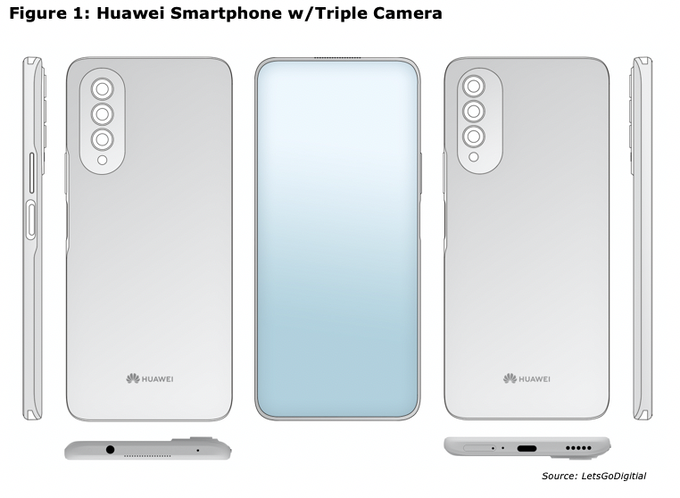 ​Huawei has previously patented smartphones with a UPC design, but it remains unknown when the first Huawei phone with UPC will be introduced.