Huawei will launch a foldable smartphone this month, and in March, it is expected to unveil the P50 series. The information comes from leaker Teme, who says that the Huawei P50 series will be introduced towards the end of next month, around March 26 and 28. The P30 and P40 were also announced on the same date in 2019 and 2020, respectively. The tipster claims that the series will consist of three phones. The standard model, which in essence will be a 'Lite' variant, will be powered by the Kirin 9000E, which is a slightly less powerful version of the flagship Kirin 9000 SoC.  Teme adds that the phones will feature a new design with a new ultra-sensing camera system, display quality, and gaming-centric feature will be some of their main selling points. Per previously leaked information, the standard model will sport a 90Hz display and the Pro variants will have 120Hz screens.  An insider from the Huawei supply chain revealed orders for components are lower compared to last year’ P40, and there are delays in supplying them, which will affect the overall availability of the devices. 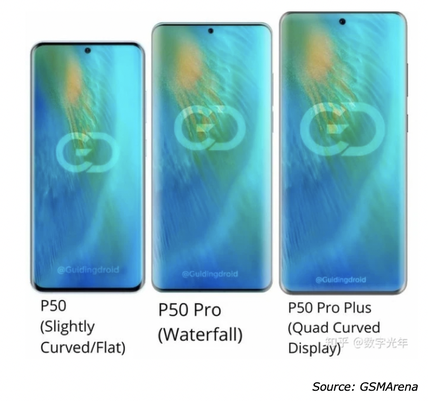 ​Other specs are largely unknown (not leaked yet), and it appears that the handsets will be available in both Android (open source) and Harmony OS (Huawei's self-designed operating system) versions.