Huawei eked out higher sales and profit last year, but growth plunged after its smartphone unit was hammered by U.S. sanctions. The company reported that sales of phones, network gear and other technology rose 3.8% over 2019 to 891.4 billion yuan ($135.8 billion), a decline from the previous year’s 19.1% growth. That was propelled by a 15.4% gain in China, while sales in other markets shrank.  The results reflect the damage from sanctions and point to a possible future for Huawei that focuses on China and on networks and other products that are less vulnerable to foreign pressure. Huawei says it has a stockpile of U.S. chips for its high-end smartphones, but executives have said those are running out. Ren Zhengfei, the Huawei founder said in February he sees little chance that sanctions will be lifted said but that U.S. suppliers have lost $10-20 billion in annual sales to Huawei and expressed hope for unspecified “help from national leaders around the world” to restore interaction with global chip suppliers.

Sales growth was the weakest since a one-year contraction in the early 2000s after the tech industry was shaken by the collapse of share prices for internet companies on Wall Street, according to the company.
Sales of smartphones and other consumer products rose 3.3% over 2019 to 487 billion yuan ($74.1 billion), or 54% of total revenue. That was down from a 34% increase in 2019.

In a show of technical prowess, the company unveiled a folding smartphone in February with an eight-inch-wide (20-centimeter-wide) screen. But it said the Mate X2 will be sold only in China, possibly reflecting shortages of processor chips to manufacture it.
Research and development spending, already among the highest for any company, rose to 141.9 billion yuan ($21.6 billion), according to Huawei. That was 16% of revenue, up from about 10% in previous years. Sales in 2020 were hurt by the coronavirus pandemic. The 15.4% sales growth was less than half of 2019’s 36.2%. Network equipment sales to global phone carriers were flat at 302.6 billion yuan ($46.4 billion) after Washington pressured European and other allies to exclude Huawei as they upgrade to next-generation technology.

The clash with Washington prompted the ruling Communist Party to make transforming China into a self-reliant “technology power” this year's top economic priority. The Finance Ministry announced this week chipmakers will be exempt from import taxes on equipment and raw materials through 2030.
Huawei said 2020 profit edged up 3.2% to 64.6 billion yuan ($9.8 billion), decelerating from 2019’s 5.6% growth.

As more people worked remotely, technology sales to manufacturers, health care and other businesses jumped 23% in 2020 to 103.4 billion yuan ($15.4 billion), up from 2019’s 8.6% gain. Huawei says it is owned by the Chinese employees who make up half its workforce of 197,000 in 170 countries.  The Huawei P50 series may have been delayed yet again. It is believed that Huawei originally had an end of March event planned at which it would have announced the release of HarmonyOS 2.0 and the first phones to run it out of the box – the P50 models. However, the phone launch was pushed back – to June, according to unconfirmed info – and the company didn’t want to hold back the release of its Android replacement OS. So, Huawei officially confirmed that HarmonyOS is coming in April. Weibo users are claiming that the new launch date of the P50 has been tentatively set for May.

​
The Huawei Mate X2 will be the first device to be updated to the stable HarmonyOS release (the foldable currently runs Android 10). With the P50 out of the running, a tablet may become the first mobile device to run Harmony out of the box – the Huawei MatePad Pro2 is listed at MIIT with HarmonyOS. 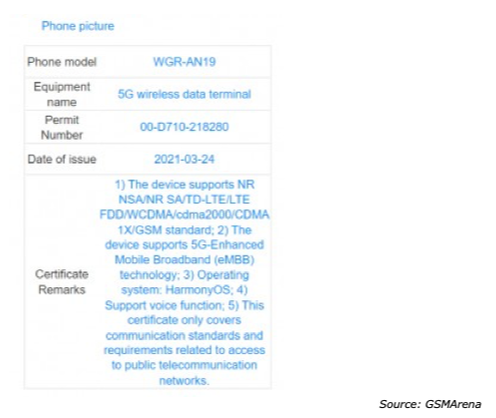 ​The tablet, WGR-AN19 (“Wagner”), Huawei MatePad Pro2 (WGR-AN19) details by MIIT reveal HarmonyOS software has popped up in a few other places. From what we can gather so far, it will be powered by the scarce Kirin 9000 chipset. It will have two versions, one with a 12.2” display from BOE and one with a 12.6” display from Samsung (presumably an AMOLED). Additionally, it will support 40W fast charging, as per 3C data.