Honor announced the V40 5G smartphone in China. It is the first handset after its separation from Huawei in November. The Honor V40 5G carries support for 5G connectivity as it features a powerful Dimensity chip. It featured a large-sized OLED display with 80-degree curvature at its left and right edges. The phone is flanked by a 50-megapixel triple camera system and a 16-megapixel dual selfie camera setup. It also comes with support for fast wireless charging technology. The Honor V40 5G has a 6.72-inch screen with a dual punch-hole design. It is the first V-series phone from Honor to feature an OLED panel. The screen offers a Full HD+ resolution of 1236 x 2676 pixels resolution, a 10.7-bit color depth, a 120HZ refresh rate, a 300Hz touch sampling rate, and a DCI-P3 color gamut. The display is integrated with a fingerprint sensor. It appears to be fitted with the same display which can be found on the Huawei Nova 8 Pro that went official in December. According to Honor, the V40 5G delivers a screen-to-body ratio of 92.3 percent. As far as the rear design is concerned, the Honor V40 5G has a glass back, which does not attract fingerprint marks. It weighs 186 grams and has a slim profile of 8.04mm only. 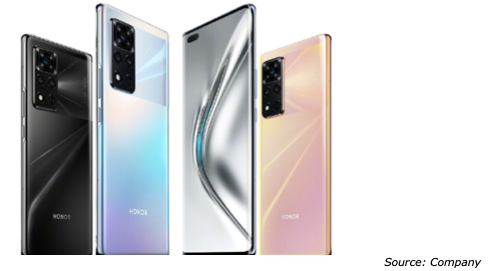 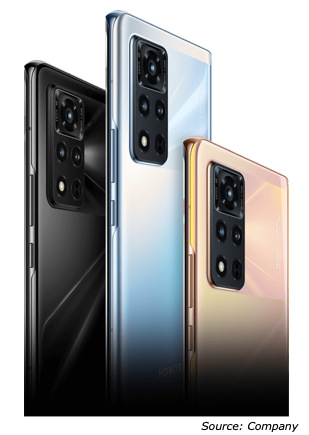 The pricing and variants of the Honor V40 5G in China:

The Honor V40 5G comes in color editions such as Magic Night Black, Titanium Silver, and Rose Gold. The sales of the V40 5G have commenced in China. Recent reports have revealed that the phone could be debuting with Honor View 40 moniker in Q2 in international markets. Instead of Huawei’s AppGallery, the smartphone is expected to arrive with Google apps and services.