​Armed with a digital mastering technology, Ceres Holographics, claims that its Holographic Optical Elements (HOE) hold the key to enable car OEMs and Tier Ones to design a HUD dreamed of since the 1980s. The automotive industry has been itching for a transparent display that can display navigation information on the windshield, sparing the driver the distraction of looking away from the road.

Figure 1:  HUD using TD (Left) & AR-HUD (Right)
Source: Ceres
Ceres is confident that its holographic technology can overlay bright, wide field-of-view information onto a curved windshield, using a significantly smaller projector package than anyone has previously been able to develop.
Over the years, carmakers have tried various technologies to generate on-screen images, ranging from CRT and LED to “combiners” using optical waveguides. But none really took off, Ceres CEO Andy Travers told EE Times, “conventional technology needs a projector package that’s too big to fit inside a dashboard. Ceres is rolling out its HOE technology in two phases applied to two separate products. First will come a “Transparent Display” (TD) based on a simpler projector. The second will be an “Augmented Reality-HUD” (AR-HUD) with a fancier projector. For both products, Travers told EE Times that Ceres has OEMs and Tier Ones already testing the technology, with some in final testing. Travers envisions the production of cars with TD to start in 2022 or 2023, with cars with AR-HUD to follow a year later. A hologram is essentially a physical recording of an interference pattern created by two beams of light. Ceres CEO Travers described it as “somewhat like photography.” 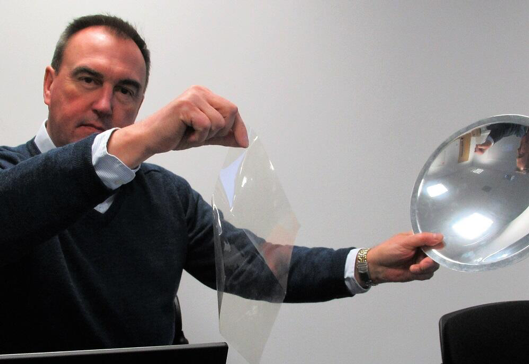 Source: EE Times
However, instead of a two-dimensional representation of an object, as captured by conventional photography, a hologram reproduces a three-dimensional light field. A lens is required in photography to record the image. But this is not so in holographic light manipulation. The light from the object is scattered directly onto a recording medium. Another important aspect of a hologram is its ability to “actually capture an optical function. Travers said, “you can make a hologram of a lens or a mirror, and then basically you could capture that optical function in a very thin piece of holographic film.” This is what Ceres has done with Holographic Optical Elements. It developed a methodology to capture and digitally master optical functions onto a piece of holographic film. The technique was invented in 1947 by Dennis Gabor, a Hungarian-British EE and physicist. He won the 1971 Nobel Prize in physics. Many engineers who have grown up reading about holography might be skeptical of claims of success by Ceres, a startup launched in 2009. After all, holography has been around for nearly three-quarters of a century and has yet to find a high-volume application. Holograms have been used in head-up displays (HUD) for fighter jets, to place a visual frame for targeting weapons systems. The nagging drawback is the use of dichromatic gelatin for the materials in HOE, noted Travers. “It’s so toxic that there is no way that material could be used in volume consumer products.” Setting Ceres apart from competitors in hologram innovation are two factors. First is its years of direct experience in optimizing non-toxic holographic film materials. Second are Ceres’ innovations in digital master printer technology. Much of the HOE developed by Ceres takes advantage of new non-toxic photopolymer film materials originally developed by InPhase Technologies, a company spun out of Bell Labs in 2000. InPhase worked on holographic data storage solutions. InPhase’s photopolymer chemistry was acquired by a German company, Bayer Material Science (now called Covestro), which produced materials called Bayfol HX. The Ceres/Bayfol HX link is Ceres’ founder and CTO Ian Redmond. He worked at InPhase for several years, leading its holographic development effort, where he gained insight into high-performance photopolymer media. The fundamental technologies Redmond learned at InPhase later became foundational knowledge for starting up Ceres when he returned to Scotland from the United States. Digital mastering is a little like sound recording. In sound recording, the vibration made by musical instruments or vocal cords is encoded in such a way it can be reproduced later, without the presence of the original vibrating matter. Holography, too, is a technique enabling a light field to be recorded and later reconstructed without the original light field. In developing digitally controlled mastering, Ceres has optimized its holographic printer around Bayfol HX photopolymer, which Ceres has used, characterized and optimized since 2009. Ceres’ digital mastering printer can produce a large hologram consisting of numerous 250mm square hologram “pixels.” Travers cautioned that each pixel “is not a TV pixel.” Rather, each one is “programmable,” so that an arbitrary light field can be generated in RGB. Similarly, a reference beam angle is also programmable. Through this mastering process, Ceres can digitally specify and program arbitrary optical functions, such as different types of mirrors and lenses, into a thin flexible film. Mass manufacturing is a major issue for holographic technologies in both AR and HUD. However, due to long and dedicated efforts from industry veterans in the holographic field holographic elements will soon be designed into products.