HKC  operates a  Gen 8.6 LCD fab in Chongqing, China that in 2020 had average monthly sales of ~$104m, from a capacity of 70,000 sheets/month, which could be expanded to 80,000 sheets/month.  While the financials for HKC’s Chongqing fab are buried in corporate releases, the $3.47b fab and associated projects are reportedly running at a loss. The company has two other fab projects (H4 in Mianyang and H5 in Changsha) under construction and a third, a Gen 11 LCD fab in Zhangzhou in the planning stage.  Given that the H4 and H5 are both mirror-image fabs, the capex is in the $3.5b range.

Korea’s Invenia recently announced a $54.8m contract with HKC that extends through August of next year. An Invenia company representative stated that “HKC is currently planning to invest in OLED” and expects “it will be able to quickly enter the OLED market in the future.” Since HKC currently has no OLED capacity this teaser opens the possibility that HKC will be sharing some future LCD capacity with OLED production. Invenia produces a variety of tools for both LCD and OLED production, including a plasma dry etcher used in the TFT process they also produce a number of inspection tools for OLED processes. HKC has not yet signed a development agreement with UDC, which would indicate a serious interest in OLEDs. 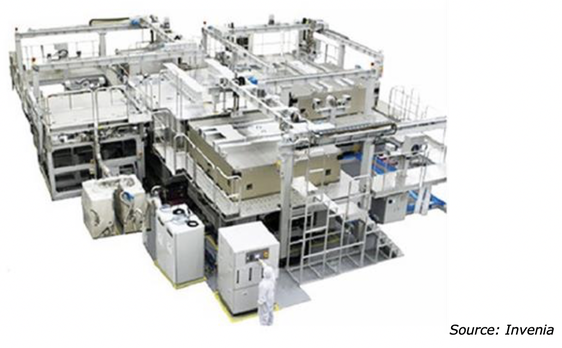