Magic Leap filed a patent for a smart contact lens in 2015. Sony, which launched its augmented reality smart glasses for developers in 2015, filed a patent for a contact lens that records what you see in 2016. In the same year, Samsung applied for a patent for a contact lens with a built-in camera, and then generated headlines again this August when it was granted a patent for a contact lens capable of recording video and taking photos, potentially just through blinking. With another decade of progress in material science and miniaturized electronics, contact lens could be capable of replacing displays as we know them. The notion of wearing lenses over the eyes to correct vision dates back hundreds of years, with some even crediting Leonardo da Vinci as one of the first proponents of the idea (though that remains somewhat controversial). Material science and understanding of the human eye have come a long way since, while their purpose has remained largely the same. In the age of wearable computers, however, scientists in the laboratories of DARPA, Google, and universities around the world see contact lenses not just as tools to improve vision, but as opportunities to augment the human experience.

As a soft, transparent disc of plastic and silicone that is worn over the eyeball, a contact lens may seem like a very bad place to put electronics. But beneath the surface, the idea of a smart contact lens has real merit. Over the past decade, scientists have made great advances with technologies that can provide different measures of health by sampling bodily fluids. Researchers around the world are working on patches equipped with sensors and electronics that can be worn on the skin to analyze the makeup of sweat, working out which chemicals are present and which ones are not. In doing so, these patches measure when stress levels are skyrocketing, when lactate levels are on the rise during exercise or tell diabetics when blood-sugar is at dangerous levels. Some could even drugs in response. The same premise applies to eye fluid that flows through tear ducts and other glands to keep them moist. This oily liquid also contains valuable biomarkers that can be used to track well-being, with blood-sugar levels a leading example. This promise of a non-invasive way to monitor blood-sugar levels through the eye has drawn huge interest from research groups and private companies alike. In 2014, Google announced work on a contact lens featuring a wireless chip and miniaturized glucose sensor embedded between two layers of traditional contact lens material. 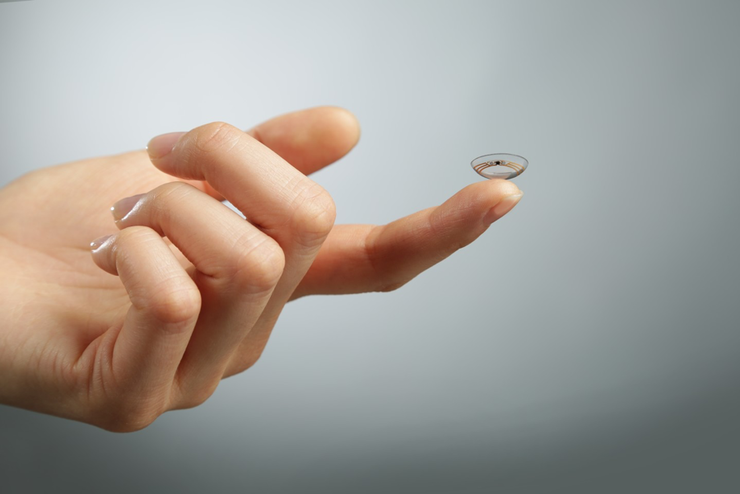 Source: Google
​
This technology detects dangerous glucose levels early on and alert the wearer when they need to take action. This followed similar concepts from Microsoft and other research groups dating as far back as the early 2000s, including versions that even change color in response to dipping glucose levels. In 2016, Scientists at Australia’s Future Industries Institute had been working on ultra-thin films with the ability to conduct electricity, and through some creative tinkering, managed to build one into a biocompatible contact lens. This prototype device had the ability to conduct electricity, raising the possibility of building tiny electrical circuits into the lens to serve all kinds of purposes, be they to power different kinds of health sensors or even some kind of tiny retinal display for augmented reality technologies. 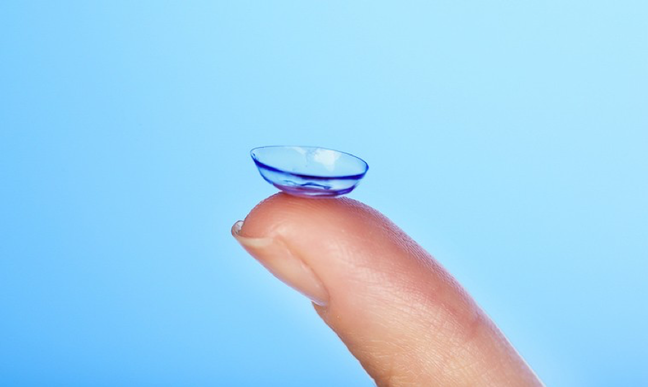 Source: University of South Australia
​
“The pursuit of glucose sensing with a contact lens has opened the door to reconsider what a contact lens can do for the wearer,” said Drew Evans, who led that research. Evans sees great potential in these kinds of contact lenses coming to offer personalized treatments for different kinds of eye diseases, if equipped with the right kinds of sensors. Research has started to unravel the different kinds of ailments that could be revealed via biomarkers in tear fluid, with dry eye syndrome, allergies and degenerative conditions like keratoconus all a part of the mix.

“Ambitious aims like this will come from rethinking the way electronic contact lenses are designed, built and used,” Evans tells us. “The futuristic contact lens won’t simply be a smart phone reconfigured on a lens. New materials, new manufacturing, new ideas will all need to combine to see these novel products become integral to personalized health.” Evans says his group has made a departure from the electrically conductive films and powered contact lenses it pursued some years ago. Instead, they are exploring the potential of using organic materials that can act as passive sensors embedded in the eyewear. “Passive means that we essentially do away with the need for a battery directly connected to our sensors,” he says.
Makes sense. Who on Earth would try and build a battery into a contact lens?

Source: Professor Jean-Louis de Bougrenet de la Tocnaye
​
In France, Professor Jean-Louis de Bougrenet de la Tocnaye leads an optical research team at IMT Atlantique, a technology university in Nantes. The scientists are working on a new generation of optical devices that could perform some exciting functions, including the ability to detect the precise direction of a user’s gaze, which could lead to assistive technologies for everything from driving, to surgical procedures to augmented reality systems that don’t require goggles and helmets. “It is clear that if we have complex electronics and computing tasks to incorporate into the contact lens, it would be necessary to have a battery to make that lens autonomous, and it had never been done,” said de Bougrenet de la Tocnaye. In April, he and the team unveiled a prototype of a device, the world’s first standalone contact lens with a battery inside. As a demonstration of what it could do, the team used the onboard battery to power an LED for a few hours, but they expect things to go a whole lot further than that. “The efficiency of the battery will depend on the thickness and the surface area,” explains de Bougrenet de la Tocnaye. “We can’t put something over the iris completely, so the battery at the moment is a kind of ring around it. But of course, in the future you’ll also want to cover the pupil part, and in that case the battery should be transparent. This will become possible through the use of graphene technology to make electronics transparent.”

Figure 4: Standalone Contact Lens With An Onboard Power Supply 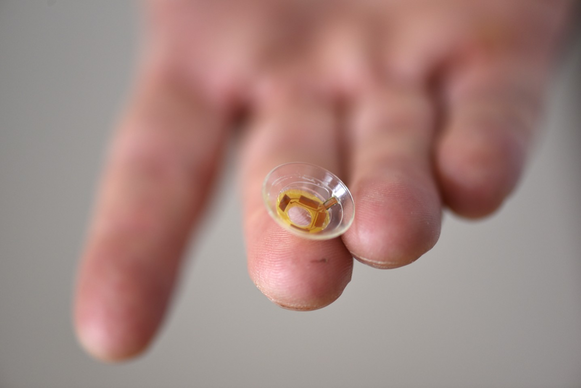 Source: Professor Jean-Louis de Bougrenet de la Tocnaye
​
With further development and the kinds of advances that de Bougrenet de la Tocnaye anticipates, transparent, standalone contact lenses with onboard power supplies could find all kinds of uses. “We are just at the beginning,” de Bougrenet de la Tocnaye tells us. “I have some projects that I am unable to talk about for the moment. But just to give you an idea, what we are working on currently is a contact lens that includes a small device and battery to track the direction of your sight with a laser beam. This system could really detect the direction of your sight very easily, along with which kind of object you’re looking at, whether it is far from you or close by.” This technology could be part of the future of healthcare, tracking concentration levels among doctors performing marathon stints in surgery, or a part of our automotive future, monitoring fatigue by detecting when the drivers’ eyes start to wander from the road (some researchers are already developing these kinds of devices).

It could support the future of warfare as DARPA has spent more than a decade investigating smart contact lenses to give soldiers an edge in the field. Imagine the type of information laid over the screen on a first-person shooter game, with the player able to check inventory or quickly glance at a map without looking down, but applied to the real world. While helmets and goggles are viable way of providing this, a transparent contact lens with a display built in would be even better.
“The idea is to substitute,” says de Bougrenet de la Tocnaye. “With an augmented reality system, you are looking through glass, which is semi-transparent, so you have some additional information over the real world. Everything is materialized on the glass display, but the idea is to transfer that directly onto the retina so that you never need goggles or a helmet.” While DARPA has made some progress toward smart contact lenses on its own, it has also shown interest in technologies to emerge elsewhere, including the battery-powered contact lens developed at IMT Atlantique, de Bougrenet de la Tocnaye confirmed. While noting that this technology is not yet proven, he points out that there could be real opportunities for consumer technology companies willing to pursue it. “We are just at the beginning, says de Bougrenet de la Tocnaye. “It is very difficult to answer what we will be able to do, because we are just discovering what the capabilities are. The technology is ready to integrate a lot of things into a contact lens, and also into a patch on the skin. In the future, the human being will really get ahead with these kinds of sensors and devices on the body.” From: New Atlas
​