​Last week we reported that the US Department of Commerce has started granting permission to major Huawei suppliers (albeit a very small minority of them) for supplies of smartphone-related materials and components, including semiconductors, sensors and displays. However, approval is apparently still being withheld from Mediatek and Qualcomm, who are involved in making vital application processors (AP), and memory makers such as Samsung Electronics and Hynix. Intel and AMD have been given supply approval for a limited number of PC-related products and applications. The fact that permission is being granted at all is a positive development, but does not at present suggest a bright outlook. The primary targets within Huawei are semiconductors (HiSilicon) and 5G infrastructure (base stations, network equipment), which correlates to supplies used in smartphones and PCs. However, as smartphones rapidly become 5G compatible, the category would become a grey zone (e.g., permission granted for use in 4G or older phones, but denied for 5G handsets). In such an event, even if supplies of APs and other smartphone-related components are approved, but not extended 5G-compatible devices, the outlook would remain clouded. In addition, even assuming the continued existence of the smartphone business is tolerated, the question of whether Huawei Technologies can continue operating in its current form, whereby a single corporation is involved in both completed consumer products (smartphones, PCs, TVs) and commercial products (5G infrastructure) will depend on the decisions and approvals made by the US. Huawei will therefore find itself positioned on the back foot.

One possible solution would be to spin out its smartphone division and other consumer-oriented businesses. Methods available include MBO, capital injection from a third party, or divestment. Maintaining current management would be preferable given the astuteness of the company’s business strategy to date and the need to keep high-quality staff on board. Huawei’s smartphone business is broadly divided based on the location of its development facilities, namely, between Shanghai (flagship models: P, Mate), Beijing (mid-range: Nova, Honor), and Xi’an (low-end: including ODM models). One strategy would be to retain the Shanghai-made models as the core of a new entity placed outside of Huawei control, dispose of the Honor and other Beijing-made handsets to a Tier 2 maker, and either do the same to the Xi’an models or sell them to an ODM client. Of course, quite how the US would react to such a development is unknown, and the acquirer/investor would take on significant risk. Since the consumer divisions together generate sales of ¥7.2t, it will likely take some time before any tangible progress is made. The key to raising the chances of a successful deal may be securing capital from outside China. 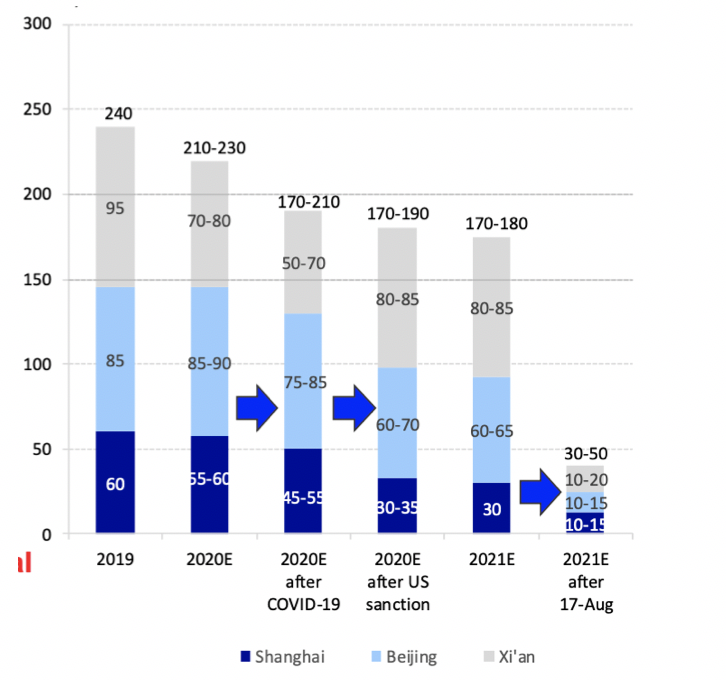