After the underwhelming response to the Pixel 3 series, Google decided to launch an affordable Pixel that offered the same camera prowess but without many other premium features like an IP rating, wireless charging, glass design, etc. This decision increased Google’s smartphone sales two-fold and affirmed a spot for the A series in Google’s hardware portfolio. The Pixel 3a and the Pixel 3a XL were succeeded by the Pixel 4a and the Pixel 4a 5G in the following year. In 2021, the Pixel 5a (codenamed barbette), succeeds the Pixel 4a.

The Google Pixel 3a was unveiled at the Google I/O 2019 developers conference, held in May of that year, and the Pixel 4a was expected to be released around the same time in 2020. The COVID-19 pandemic, however, threw a wrench in these plans and led to the cancellation of a physical Google I/O event. Google also announced the Pixel 4a 5G alongside the more premium Google Pixel 5. 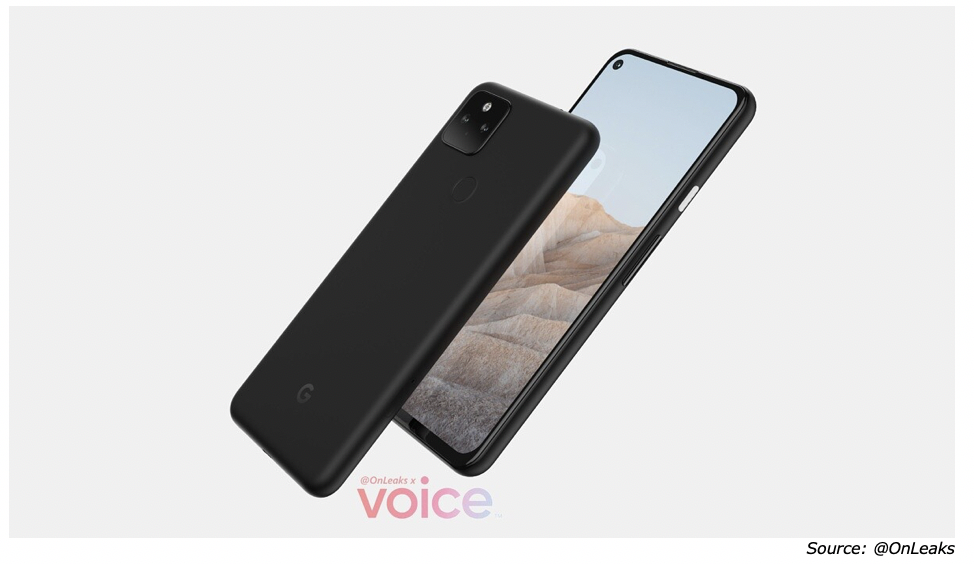 ​Based on the last year’s launch timeline, Google tis expected to unveil the Pixel 5a in or around August 2021.

The Pixel 5a is set to use the same camera as the Pixel 4a 5G and the Pixel 5.
OnLeaks notes the Pixel 5a is 2.3mm longer, 0.8mm narrower, and 0.6mm thicker than the Pixel 4a 5G. The alleged dimensions of the Pixel 5a are 156.2 x 73.2 x 8.8mm (9.4mm thick including the camera bump). The increase in length appears to be because of the chin that appears slightly larger in the leaked renders than the previous devices.

Google Pixel 5a leaked renders, Source: @OnLeaks
Despite these minute changes in the dimensions, the Pixel 5a will inherit a 6.2-inch OLED display from the Pixel 4a 5G. The display is expected to have a Full HD+ resolution and a hole punch cutout towards the top-left corner, much like the Pixel 4a 5G but with a 90Hz refresh rate, with no curves around the display. Google seems eager to stick to a capacitive fingerprint scanner on the phone’s back instead of moving to under-display fingerprint technology. The volume rockers and the color-accented power button appear unchanged too. The Pixel 5a is suggested to retain the 3.5mm headphone jack, even almost three years after Google removed it from its flagship Pixel devices. The stereo speakers setup remains intact too.

The Pixel 5a should feature a dual rear camera setup — a first for the affordable Pixel range. This will include a 12MP primary camera and a 16MP ultrawide angle camera. These cameras are likely to remain unchanged from what we have seen on the Pixel 4a 5G and the Pixel 5, with generational upgrades in terms of image processing alongside probably some exclusive features. Exactly like the Pixel 4a 5G and the Pixel 5, the two camera sensors on the Pixel 5a are placed on a horizontal line along the center of the square camera bump. As per the leaked renders, another sensor lies below these cameras, and it could either be a PDAF sensor or a flicker sensor.
The selfie camera is once again nestled inside the hole punch cutout in the display. While the leak did not reveal this camera’s resolution, Google has traditionally used 8MP cameras, and that has served well. We can expect the same to be carried over to the Pixel 5a. The price is expected to range from $450 to $550.