Vertical Divider
Google Pixel 5, Better than Previous Pixels but Less than Top Competitors
​
The Google Pixel stands out from its predecessors with an edge-to-edge display, truly uniform bezels about 4 mm for each side uncommon for Android phones. Google continues to use a flexible OLED substrate for its flagship, which can be made thinner and be made to have better viewing angles and polarization characteristics compared to the rigid OLED that they use in their mid-range Pixel a-lineup. The thinness of the flexible OLED also increases optical clarity by bringing the emissive pixels closer to the cover glass (thus closer to the fingertips), which helps the screen appear more paper-like and inky. Most modern flagship OLEDs have been made of a flexible substrate for the past couple of years, but it is important to make this distinction since its optical advantage does not show up in current display measurements. Additionally, the front camera cut-out on the Google Pixel 5 appears flush with the display, while the camera on the Pixel 4a appears slightly raised compared to the screen with a noticeable silver ring around the component. The Pixel 5’s 6-inch display size may lead some to believe that this is a plus-sized device, but it is a relatively-compact device. The body of the Google Pixel 5 is about the same size as all of its smaller-sized predecessors. Where most of the increase in display size comes from the bezel reduction along the vertical axis. The Google Pixel 5’s resolution is 2340×1080 (432 ppi). The panel is sourced solely from Samsung Display, and the hardware seems to have been slightly upgraded from last year’s to accommodate a higher peak brightness. However, the display driver IC remains the same as that of the Pixel 4 XL’s (s6e3hc2), and the display panel is an older-generation Samsung OLED putting the Google Pixel 5 behind other flagships that use Samsung’s newer generation of OLED in terms of peak output and power efficiency. 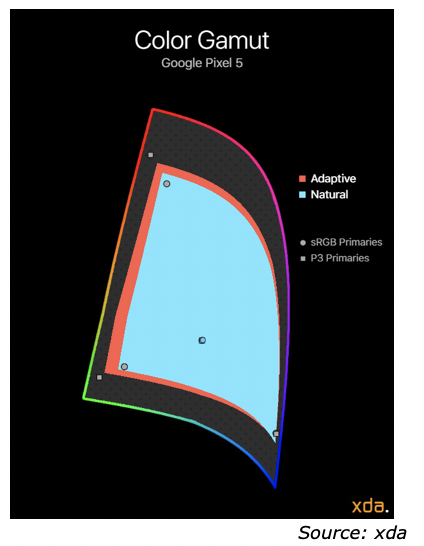 All three color profiles share the same exact white point at 6400 K. The tone mapping of the profiles is also identical, which targets the standard gamma power of 2.20. The only difference between the profiles is in the color primaries of their target color space:

​* Average pixel level (APL) is the area of lit pixels on the display expressed as a percentage of the total display area. Emissive displays, like OLED, vary in brightness depending on the intensity and the area of pixels it emits. “Measured Luminance vs. Display Area” or “Measured Luminance vs. Window Size” would both be better-fitting names for the chart since the APL metric can entail many other circumstances, but APL has been colloquially used and is generally understood when discussing display brightness.


Display tone mapping and contrast, along with actually assess it correctly—the advent of the Perceptual Quantizer provides the best look at luminance measurements. Display tone mapping may be the most important aspect of a display, and a display with bad tone mapping ruins the experience. Bad tone mapping can result in crushed shadows, colors that are too dark, and/or a washed-out display. There is a slight difference between the tone mapping in the 90 Hz and 60 Hz modes, but most of the differences come from color hue.

The tone mapping of the Pixel 5 targets the standard gamma power of 2.20 (except for in high brightness mode), which is a necessary baseline for accurate color tones and image contrast. And for the most part, we see that Google Pixel 5 accurately tracks the 2.20 gamma power, with a few hitches.

The Pixel 5's OLED panel exhibits zero black crush throughout its brightness range.
Besides these two issues, there’s one item that sets the Google Pixel 5 apart from most other displays: The Pixel 5’s OLED panel can render its first step gray (#010101) throughout its entire brightness range -- in other words, zero black crush from the display — which is a feat that I’ve only measured iPhones to perform until now. 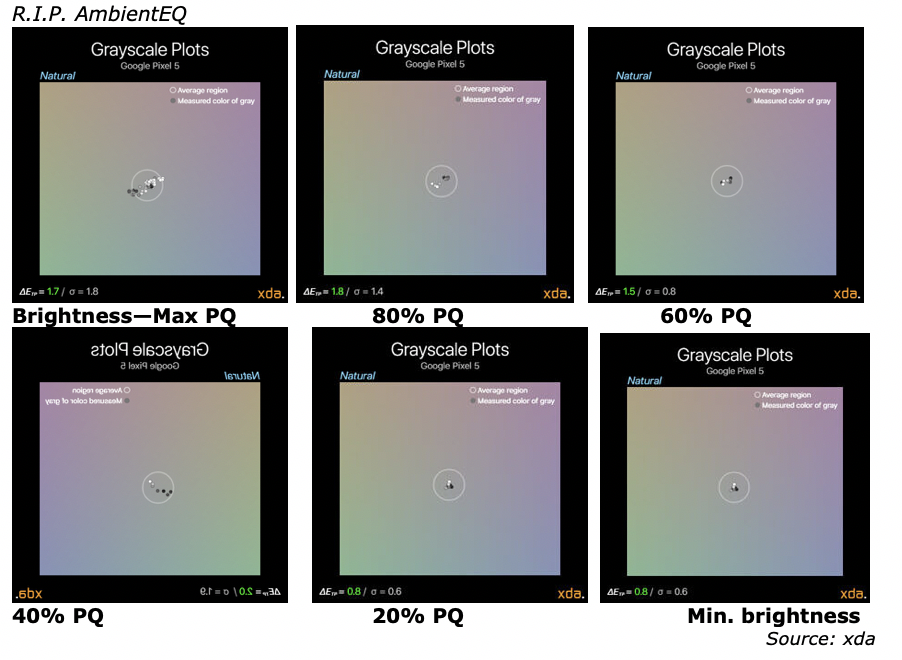 The Smooth Display feature of the Google Pixel 5 will switch from 90 Hz to 60 Hz when the display is static or when playing ≤60 FPS content. If the display brightness is below 25 nits (14/255 brightness setting), the Pixel 5 will stay fixed at 90 Hz. In high refresh rate displays, there can be noticeable differences in color calibration between the 60 Hz and the 90/120 Hz modes. 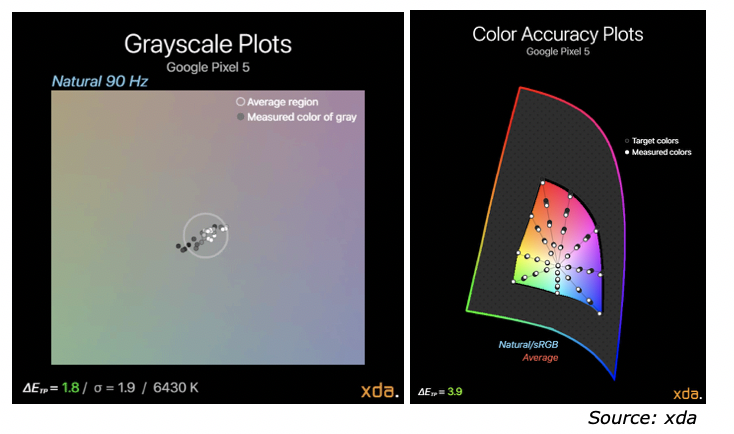 ​The first figure above switch between the 90 Hz plots and the 60 Hz plots above 25 nits, showing the color difference when the Google Pixel 5 switches into its 60 Hz display mode. There is a slight shift towards green for mid-tones and darker colors, but the shift was barely visible. These differences are vastly less significant than what was seen on the Pixel 4/4 XL or the OnePlus 8 Pro.

Google Pixel devices performed quite well in color accuracy in their calibrated display mode. However, the color accuracy on the Pixel 5 isn’t bad per se, but there are errors.
The Google Pixel 5 has a very good display without state-of-the-art panel hardware, and it’s Google’s best display yet.
-The Pixel 5 may not have state-of-the-art panel hardware, but it's a contender for one of the best displays this year

The general consensus of the Google Pixel 5 is that it’s a genuine refinement over previous Pixel phones. Google is doing the best they can with parts that they’re familiar with, and they continue to focus on aspects that constitute a practical smartphone. In the display department, the Pixel 5’s color tone performance has been refined to an extent that surpasses just about every other flagship.