Vertical Divider
Over the last two years Google has hired hundreds of hardware engineers and supply chain specialists from Apple and acquired 2,000 engineers from HTC in 2017.
Google’s Pixel shipments are inconsequential in the global smartphone market. 2018 were around 4.68 million units, 0.33% of the total market, compared with 3.45 million units, or 0.2% of the market in 2017. "Google ... sees it as a more direct way to collect user data and make its flagship software and internet services a bigger and more integral part of people's everyday lives," said Joey Yen, an analyst at IDC. "Google's hardware push will make it difficult for people to live without Google's services and ecosystem ... That's the big picture the Internet giant always has in mind." Google also plans to release In the smart speaker market, Google is catching up with market leader Amazon. Google secured 29.8% of the global market in the July-September period, when it shipped around 5.9 million smart speakers, up 187% from a year ago, according to market consultancy Canalys, just behind Amazon's 31.9%. In Q418, we estimate Amazon dropped to 28% and Google rose to 30% market shares. 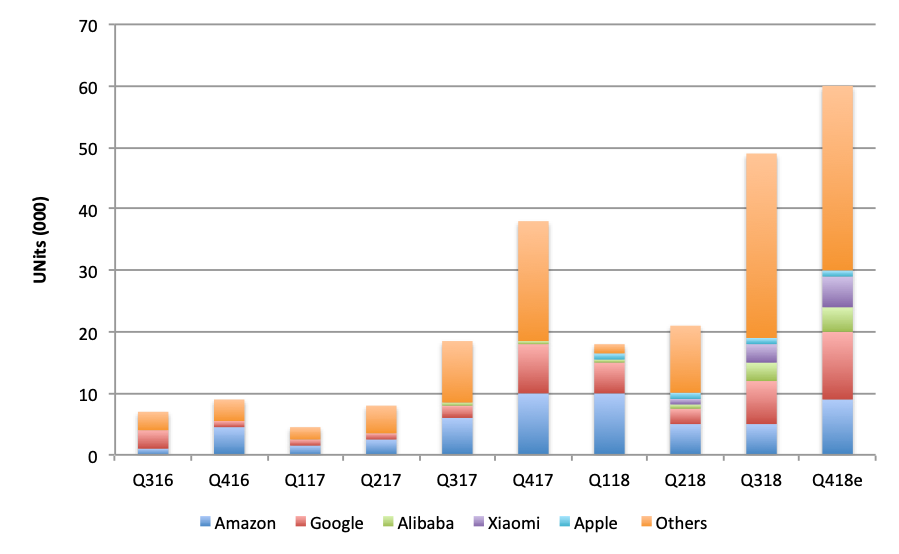 Source: Canalys
​
​In the wake of Apple’s slowdown in iPhone production, assembler’s Foxconn and Pegatron and MacBook maker Quanta Computer, are looking to Google as a possible supplement. Foxconn unit FIH Mobile, which produces Android phones including the Pixel, has increased production lines dedicated to Google products. The team at FIH Mobile that handles Google's business also receives bigger bonuses than teams serving other clients in the Android camp, such as Xiaomi, due to the U.S. Company's healthier growth outlook. Pegatron secured orders to build Google's Home Hub last year and has longtime production ties with Nest Labs. Quanta helps Google manufacture a majority of Home smart speaker products and serves as its key data center server builder. Compal Electronics, an iPad maker, is in talks with Google to start making smart speakers. Pegatron recently agreed to build a facility in northern Vietnam that could house 20,000 local workers mainly for producing Google products, according to people familiar with the matter. Quanta meanwhile has expanded its plant in the northern Taiwanese city of Taiyuan for a wide range of cloud computing-related products, including those from Google.
Google gets most of its revenues and profits from search, so if the company wants to go after market share is it willing to take some losses by offering this phone at a low enough price to intrigue consumers. Losing $50 a phone on 20 million units wouldn't make a dramatic difference for a company that had a net profit of more than $30 billion last year according to its 10-K filing. If Google were to launch a $500 phone while producing ~20 million/year, they would add $10 billion in annual revenues. While Google is projected to see revenues of more than $160 billion this year, revenue growth is forecast to slow down into the teens. Adding $10 billion in revenues, even if it cost a billion in profits, would help Google’s revenue growth and some of the losses could be made up from