Vertical Divider
Google Announces Time-lapse Astrophotography for Pixel
​
Google published a new Android Security Bulletin. It’s also been 3 months since the last Pixel Feature Drop, so Google took the opportunity to also drop a new set of exclusive features for Pixel users. Many of the features announced by Google haven’t rolled out yet, though the latest Google Camera update brings at least one of the promised features: time-lapse astrophotography. Google Camera 8.2.400 is now rolling out on Google Play (H/T cstark27 and MwPratama), and after installing it on a Pixel 4 running Android 11, we noticed that the astrophotography video feature has been added. If you navigate to GCam’s Settings > Advanced, you’ll see a new “enable time lapse for astrophotography” toggle with the description “export photo and time lapse. Uses more storage space.” In the astrophotography tip that’s available in the Night Sight mode settings, a new line has been added that says “wait at least 2.5 minutes to capture a time lapse in addition to a photo.” 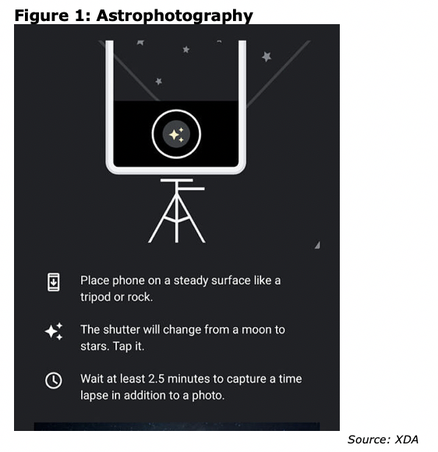 ​The other feature coming to the Google Camera app — i.e., Locked Photos integration hasn’t been spotted that yet. There’s supposed to be a toggle in the top-right corner that lets users choose between saving to the photo gallery or the Locked Folder in Google Photos, but since the latter feature hasn’t rolled out yet, it likewise hasn’t been enabled yet in Google Camera. Locked Photos is code-named “mars”, while the time-lapse astrophotography feature is code-named “kepler”.
Outside of a few leaks, the Microsoft Surface Duo 2 is largely a mystery. The handful of reports that have emerged so far have only revealed that it will be 5G-ready and will boast a faster processor and a better camera. Windows Central has thankfully finally shared some concrete information about the device.

Per the outlet's sources, the dual-screen device, which is codenamed Zeta, will be fueled by a flagship chipset, which means we can expect the Qualcomm Snapdragon 888, or even the rumored Snapdragon 888+. The Duo 2 is also rumored to have NFC for contactless payments.

Design-wise, it isn't expected to be a huge departure from the current model, but we can look forward to subtle changes such as slightly bigger screens with rounded edges and thinner bezels for a more refined look.

The Surface Duo doesn't have a camera on the outside and its single 11MP camera was quite a letdown, to say the least. While the latest report is thin on specifics, it does say that the successor will get an external camera array with a bump for improved photography.

The Duo 2 will come pre-installed with Android 11 and this time around we can expect more than just stock Android, considering the company hired a software company last year to work on the device's operating system.

It is believed that the Surface Duo 2 will launch in the second half of the year, possibly around September and October.

While the rumored upgrades could certainly make the Duo 2 one of the best smartphones of 2021, they may prove counterproductive for its commercial success if they lead to a price increase. The OG model is already considered too expensive at $1,400.