Vertical Divider
Google Announces Pixel 5, Pixel 4a 5G
​
Google took the wraps off of the Google Pixel 5, offering a series of premium features like an OLED display, a dual-sensor camera system, 5G support, and a Snapdragon 765G processor. All those features together are likely to offer a premium experience, and at $699. But those features aren’t exclusive to just one Google phone as they’re all available in a $499 phone. The Google Pixel 4a 5G was also released alongside the Pixel 5, and it could represent a major shift for Google. It’s missing some other features — but they’re likely features not needed by everyone, especially if it means saving $200 for a still-incredible phone. 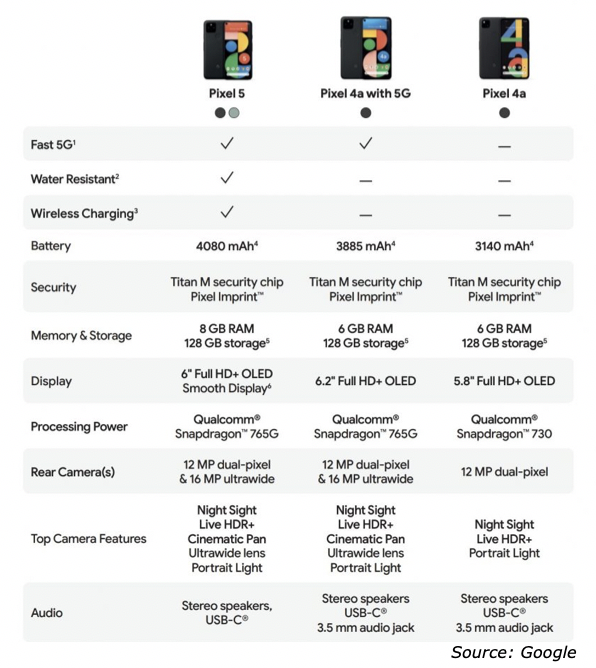 ​Google also launched a new Chromecast with Google TV, and new Nest Audio at its short and sharp event on Wednesday. The new Pixel 5 and Pixel 4a 5G were exactly as Google previously leaked. The Pixel 5 will be $699 (€629), available to pre-order now in the US, plus UK, Canada, Germany, France and several other countries with a release date of October 15. The Pixel 4a 5G starts at $499 (€499) with a release date of October 15 in Japan, and November 9 elsewhere. Google provided a table graphic to aid comparisons.

The differences between the two are fairly small but the Pixel 5 is the more fully-featured device:

Ultimately, the Pixel 4a 5G is probably the Google phone to get this year.