Vertical Divider
Global Release of the Xiaomi Mi 10 Delayed w/Cancellation of MWC
February 16, 2020
​
The Xiaomi Mi 10 released in China but not globally has 6.67-inch, 2,340 x 1,080 pixel resolution AMOLED screen that has a 90 Hz refresh rate. A Qualcomm Snapdragon 865 processor is paired with a maximum of 12 GB of RAM and up to 256 GB of internal storage. 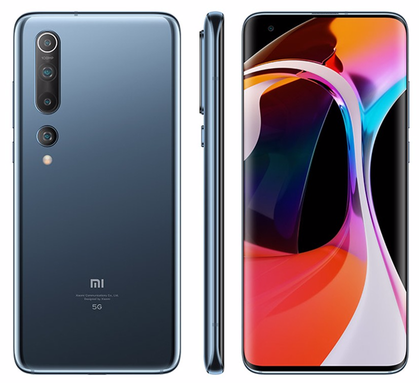 Source: Company
On the back there's a quad-lens camera – 108 MP main + 13 MP ultrawide + 2 MP macro + 2 MP field-of-view – and there's a 20 MP selfie camera on the front. The battery capacity is 4,780 mAh, and offers 30-W fast wired or wireless charging.
The Xiaomi Mi 10 Pro matches those specs exactly, but improves the rear camera to a 108 MP main + 20 MP ultrawide + 12 MP portrait + 8 MP telephoto affair, which brings with it up to 10x "hybrid" zoom (presumably a mix of optical and digital).
The only other significant difference is a smaller battery at a capacity of 4,500 mAh, though the Mi 10 Pro does up the wired fast charging rate to 50 W. Both phones come with Android 10 plus Xiaomi's own Android skin on board. 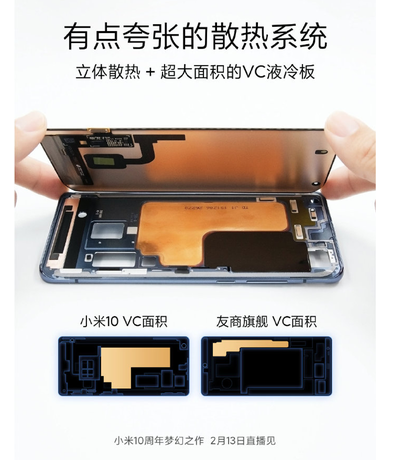 Source: Company
The latest teaser poster was shared by Xiaomi’s co-founder Lei Jun on his official Weibo page and it showcases the Mi 10 Additionally, the poster also reveals that the device will feature a curved display similar to the S20. In a separate post, Jun also revealed that the Mi 10 duo will include support for UFS 3.0 storage, which will help the device achieve the fastest sequential write speeds of up to 730MB/s for the 108 MB camera sensor. The post highlights information shared by Xiaomi’s thermal design experts who have revealed that the Mi 10 will feature the largest (by area) VC heat-dissipating board in any smartphone. The heat-dissipating board is almost three times the area of the VC on the Mate 30 Pro 5G and it’s expected to greatly improve the Mi 10’s thermal performance. To improve the system’s efficiency even further, Xiaomi has made use of a Graphene heat dissipation material to move heat away from the core components of the flagships. The device will also include a total of 6 layers of graphite sheets covering almost the entire body, along with an independent graphite cooling solution for the camera and the flash. Rounding it all off is a large copper foil and thermally conductive gel that covers every single component inside the machine for optimal cooling.

In a post on the Chinese social media platform, Xiaomi’s Wan Teng Thomas revealed that along with the heat-dissipation hardware, the Mi 10 will make use of software to analyze the temperature control point data and dynamically adjust the power consumption to help the Xiaomi Mi 10 achieve unparalleled thermal performance.

Xiaomi delayed its global launch for the Mi 10 series which was announced in China on 2/13. . The event was expected to take place in Barcelona on February 23, but will now be scheduled for a later date. Xiaomi cited the cancellation of MWC 2020 as a reason for its decision to delay the European launch of its flagship phones.