​The Galaxy Z Fold 2 features a 6.23-inch AMOLED cover display, a 7.6-inch AMOLED folding screen, 12GB of RAM, a total battery capacity of 4,500mAh, and a Qualcomm Snapdragon 865 Plus processor. It also comes equipped with a side-mounted fingerprint sensor and 256GB of storage. Samsung has made minor improvements to the cameras on the Galaxy Z Fold 2. The only change is the single camera on the internal display as compared to two cameras on the original Fold. The big change is the use of UTG and the increased size of the cover display. 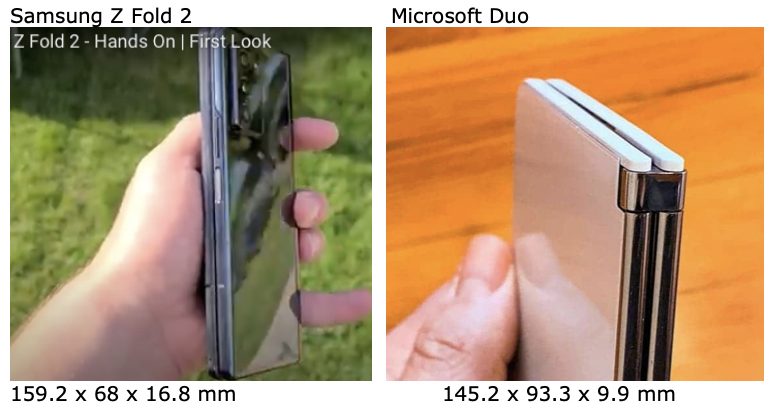 LG and Samsung have submitted patents on new hinges technology for their foldable display technology, in a bid to increase durability and reduce the possibility of wrinkles, which has become a key criticism of the technology.

Samsung Display applied for a patent for a ‘foldable display design’ which utilizes a technology for foldable displays that prevents panel damage by reducing the bending stress that occurs when the foldable substrate is folded. Samsung Display addressed the adhesive used for the hinge. A member, whose adhesive force changes according to the folding force of the foldable display is used. For example, when the panel is folded, it loses its adhesive strength and separates from the support, and when unfolded, it recovers its adhesive strength. Samsung Display explained, “It utilizes a pressure-sensitive adhesive (PSA ) that is bonded or separated by low pressure, thus increasing the durability of the panel by relieving the stress.”  As shown in the next table, the Z Fold has 10 components (layers), in addition to the panel and the TFE that need to be folded. When the substrate is bent, stress (bearing force) is generated is applied to these components, causing the display to be deformed. 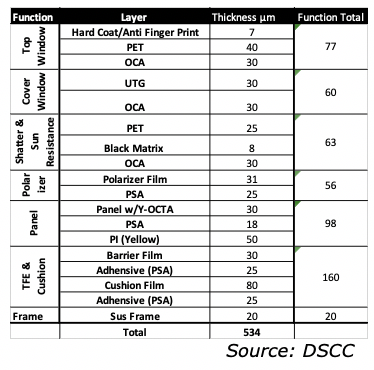 ​LG Display, which hasn’t yet sold a foldable display recently applied for a patent for a ‘flexible display manufacturing method’ that minimizes wrinkles occurring when a foldable display substrate is bent repeatedly. The design reduces the stress applied while the substrate is deformed. LG Display patented method adds a ‘control layer’ to reduce the stress on the panel. The stress absorbing layer acts as a cushion and reduces the incidence of wrinkles.