Samsung’s vertical clamshell looks to be a sleeker, more sophisticated version of the Motorola RAZR. 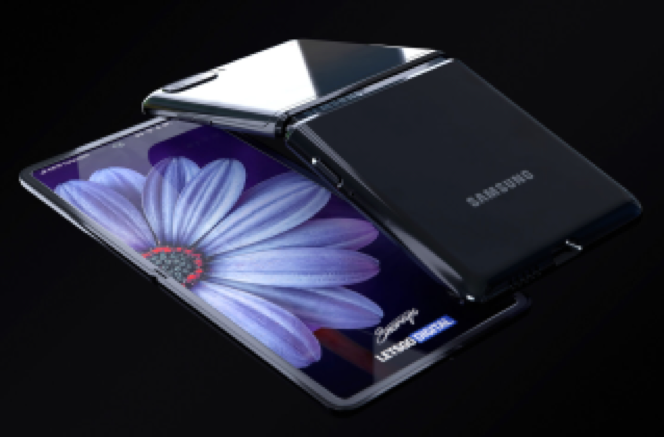 Source: LetsGoDigital
These renders by 3D artist Giuseppe Spinelli for LetsGoDigital, show that Samsung’s second foldable — codename “Bloom” —will be officially called Galaxy Z Flip.
​
It will feature a tiny external display used for time and notifications — like the Razr and a new hinge design that allows the Galaxy Z Flip to shut flush, unlike the Galaxy Fold. The hinge design that varies from the Galaxy Fold is called the “hide away hinge”.  Mysmartprice claims the Galaxy Z Flip will feature a Snapdragon 855 chip and a 10-megapixel front-facing camera. It probably doesn’t need flagship specs at this point — and it will be competing against the $1,500 Razr’s Snapdragon 710. This is a notably inferior, mid-range processor while the 855 is still top of the line silicon.
LetsGoDigital speculates that the Galaxy Flip will be competitive with the Razr, at under $1,500. Ishan Agarwal, reports the upcoming foldable phone from Samsung will include the Snapdragon 855 chipset, and not the Snapdragon 865. It will have a 10MP front-facing camera –the same image sensor that is in the Galaxy Note 10. The leaked images of the Galaxy Fold 2 show that the device is almost ready for its primetime. So, it is safe to say that Samsung was working on the device from at least the last six months – from a time when Qualcomm Snapdragon 865 wasn’t even in the scene. Therefore, Samsung might have had only Snapdragon 855 on its hand to put it in the Galaxy Fold 2. Samsung could have opted to replace the Snapdragon 855 in the Galaxy Fold 2 with the Snapdragon 865 when Qualcomm had announced the new chipset back in December. However, that would mean Samsung would have to make internal design changes, which would take time. And the brand couldn’t afford it, especially when you consider that the Galaxy Fold 2 is expected to make its debut alongside the Galaxy S20 series in February, almost concurrent with the new Motorola RAZR  In addition, sources reveal that Samsung has started production of the upcoming Galaxy S20 4G and the Galaxy S20+ 4G smartphones in its plant in India. India won’t get the 5G versions of the Galaxy S20 series devices as the country’s a 5G infrastructure isn’t ready at the moment.