Vertical Divider
Galaxy S21 to be Announced on Jan. 14th

In anticipation of a dearth in new Huawei phones and to take some of the attention away from the recently released iPhone 12, Samsung will announce the Galaxy S series in January one month ahead of what has become normal for the company. These expected specifications for the Samsung Galaxy S21 series. are not final specifications and are based on leaks and reasonable guesstimates. 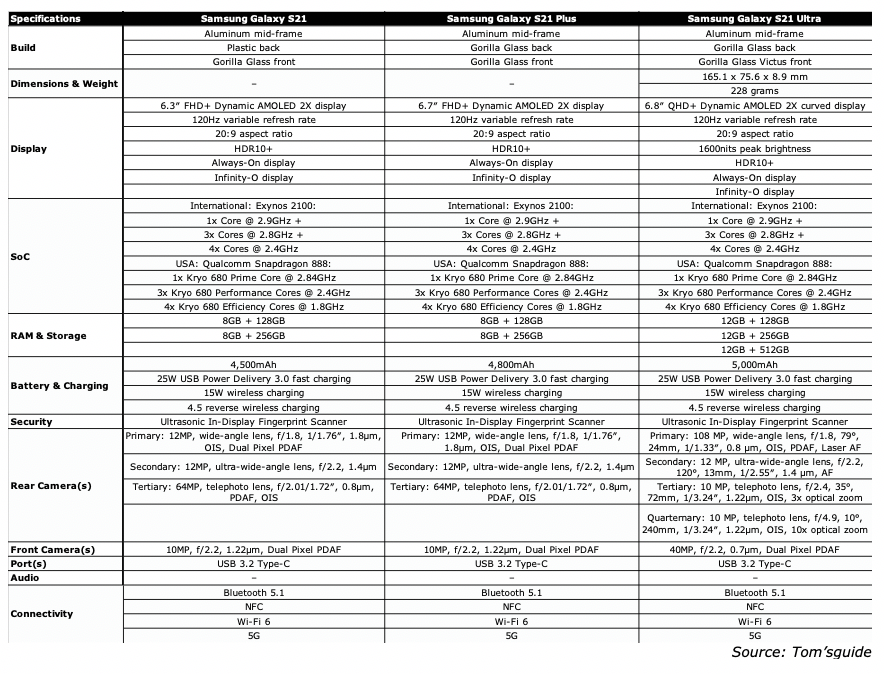 ​The baseline for performance is set, with all three of the flagships in this series coming in with the top-end Qualcomm Snapdragon 888 in the USA and select other regions, and with the Exynos 2100 internationally. There should be plenty of RAM and storage onboard, though microSD card expansion is not yet known. The rear and front camera setup remains the same on the regular and Plus variant, while the Ultra gets a complete overhaul. Between the regular and Plus variant, the differentiating factor would be the slightly larger size and the difference in plastic back and glass back.​
Figure 1: Galaxy S21 Ultra Rear Panel 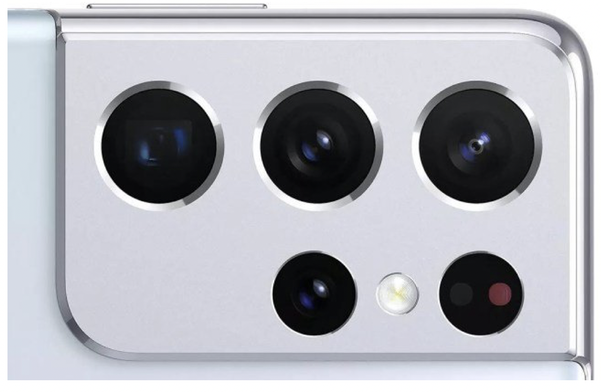 Source: Tom's Guide
​The camera setup on the Galaxy S21 Ultra is expected to be significantly better, with a second gen 108MP primary camera, the same 12MP wide-angle camera as the other two variants, a 3x telephoto sensor, and a 10x optical “super” telephoto sensor. The new telephoto sensors will feature 130% larger pixels and dual pixel autofocus, and with the 10x telephoto sensor, Samsung will be reviving its 100x Space Zoom feature. The top-of-the-line model also gets extras like IP68 water resistance and S Pen support.

Historically, the S Pen had been the defining feature of the Samsung Galaxy Note series, clearly differentiating the product lineup towards productivity-focused pro-consumers. Some of Samsung’s tablets have come with support for S Pen, but by and large, the S Pen has been part of the Note identity and is expected to be added to the Z Fold 3 and the Galaxy S21 Ultra

With the Galaxy S21 Ultra, the S Pen will reportedly be sold separately and stored separately. There’s no housing cavity within the device to store the stylus. Instead, Samsung will offer a couple of case options that will make it easier to store the stylus when not in use and charge it up as well.
The rest of the three phones, the Galaxy S21 and Galaxy S21 Plus, have not been rumored to come with S Pen support, indicating that Samsung will lock the feature to the top-of-the-line model only. Note that this is not a software-lock, but a limitation on hardware as the needed digitizer components will not be present on the other two phones. 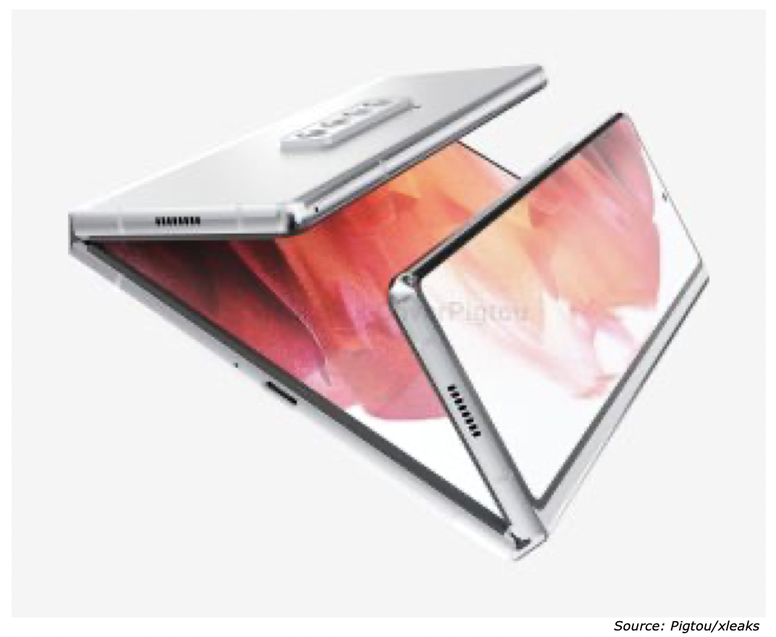 A slew of new design renders hint at what the Samsung Galaxy Z Fold 3 will look like when it launches next year, and they could signal a serious evolution in foldable phones. These renders, made and published by Pigtou and xleaks, show how a next-generation Galaxy Z Fold could potentially sport a dual-hinge design, effectively giving it a lot more folding potential, which is the source for Pigtou's renders. Both of the concepts feature multiple hinges to allow even larger displays and additional versatility, but they do so in two different ways. The first is made up of a larger central display with two smaller displays connected on the left and right, one of which is double-sided. It allows for the same fully open or fully shut usage as the existing Galaxy Z Fold, but you can also open it partially. This would be good for one-handed usage, or for accessing the single quad-camera array in selfie mode with a larger viewfinder. 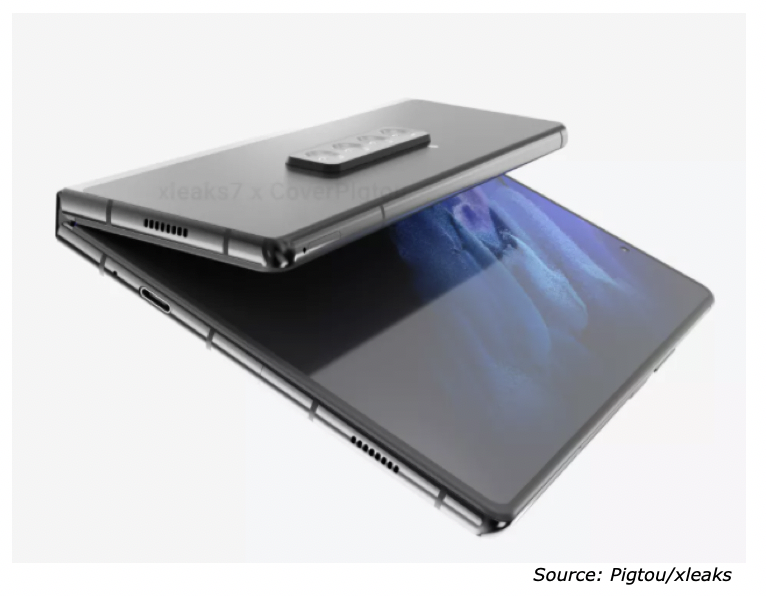 ​The Pigtou design does take some license with the illustrations from the patent. For example, it adds a punch-hole selfie camera, identical to the one on the current Galaxy Z Fold, onto the front cover. There are also speakers built into the two exterior leaves of the phone to allow for a premium stereo experience.

The second design is an actual Z-shaped foldable with three identically sized parts. It features one large internal display and a smaller external display like the Galaxy Z Fold 2. However, because the hinges open in different directions and the display wraps around one of the hinges, you could effectively use the phone in four different sizes. That sounds great, but it does mean the phone would be very thick to account for the three displays. On the back, the Z-shaped concept uses the same camera array as the first design, as well as a punch-hole display on the front display. Since Pigtou also suggests using one-third of the Z-shaped phone as a keyboard or using the first design in a 'tent' mode like a convertible laptop, it seems they are imagining these concepts will use a similar "Flex Mode" to the Galaxy Z Flip. That mode allows the phone's hinge to stay open in positions beyond simply open or closed.