The Galaxy S21 will soon be unveiled but unveiling but the new design has already been exposed in leaked renders, photos and early hands-on videos. The new camera bump doesn’t stand out as much as it did with the Galaxy S20 series and especially the Galaxy S20 Ultra. Unlike previous flagship generations whose camera bumps looked as if they were tacked onto the glass back panel, the Galaxy S21 design formula brings about a seamless transition between the camera bump and the phone’s metal frame. 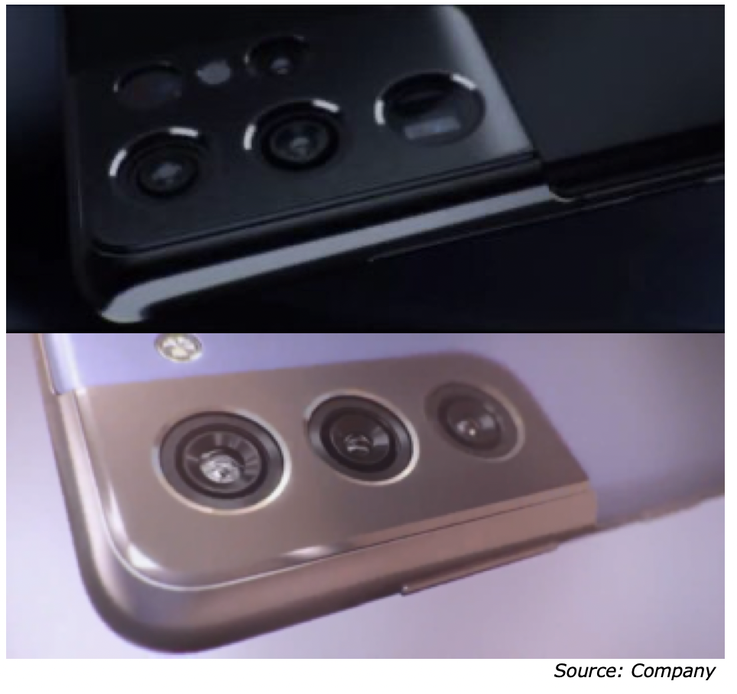 The top and left edges are flush against the phone’s metal frame and this serves to give the illusion that if you could somehow drag the opposite corner to increase the bump’s surface area, you could extend it to cover the entire back panel, resulting in a completely flat surface. And for many smartphone users, a powerful camera combo and a flat, bump-less back panel is the holy grail of design in today’s mobile world. Samsung may have given us a glimpse of the Galaxy series’ future. Both Samsung and Apple have been following a similar camera bump design philosophy in recent years and 2020 was no different. The Ultra versions of the Galaxy S20 and Galaxy Note 20, in particular, have prominent rectangular cameras, but the Galaxy S21 series is clearly headed in a different direction. Samsung’s mid-range devices like the Galaxy A42 5G and the Galaxy A12 flaunt the usual rectangular camera bump design, and although they are not as refined, they seem to resemble the iPhone 12 cameras in a roundabout way. Even more so now that they’re juxtaposed against the Galaxy S21 series’ design.

Samsung is seemingly reserving the rectangular camera bump design for some of its mid-range series, perhaps in an attempt to create an association in the mind of consumers between the flagship iPhone 12 lineup and its own mid-range Galaxy portfolio. It’s almost as if Samsung’s mid-range series is working together with the Galaxy S21 to sabotage the iPhone 12’s image and elevate the Galaxy flagships to a higher plane as a result. The Galaxy S21 series appears to have a bold new design language.