Samsung is expected to soon showcase this new display type for which Samsung filed trademark in South Korea with the Korean Intellectual Property Office (KIPO).
The trademark application has been categorized as Class 9/11 with the description mentioning OLED display; smartphone display; monitor; television screen; digital signage; computer screen’. On the same day, the company also filed for the same trademark with the USPTO (United States Patent and Trademark Office). While this new version of the company’s popular AMOLED screen seems to be definitely coming, it is not yet known what the ‘S’ stands for in SAMOLED. It could be ‘Super AMOLED’ but that seems unlikely given that the Super AMOLED screen have been around for quite some time now.

Source: Company
SAMOLED is expected to be used in the  company’s upcoming flagship smartphones, including the Samsung Galaxy S11 lineup and the next-generation Galaxy Fold smartphone. The current-generation flagships — Galaxy S10 lineup and the Galaxy Fold, both come with Dynamic AMOLED display. Samsung has never released a smartphone under their own brand with a 90Hz display, let alone 120Hz, but they could join the high refresh rate bandwagon, and the latest One UI 2.0 (Android 10) beta for the Samsung Galaxy Note 9 hints at a future phone that will have a 120Hz display. There’s a hidden option in the display settings to toggle between 60Hz and 120Hz. Obviously, the Galaxy Note 9’s display is not capable of switching to this higher refresh rate, but this definitely suggests a future phone will. The company is also using Super AMOLED display for its mid-range and premium mid-range phones. There is a reference to a 20:9 aspect ratio. Samsung is also working on lots of new features for its upcoming smartphones that extend existing functionality and make photography easier for everyone. Samsung rolls out new versions of its camera app, and is working on for future smartphones. Previously, Samsung indicated it would be  using its own 108MP camera sensor in an upcoming device. In the latest update to the Samsung Camera app, new camera features including Director’s View, Single Take Photo, Night Hyperlapse, and more. In the same update was evidence that Samsung will bring 8K video recording support to a future device, and we also found further evidence pointing at a future Galaxy device, likely the Galaxy S11, having a 20:9 aspect ratio and 108MP camera sensor. Along with 8K@30fps and 108MP camera support, Samsung is working on many new photo and video modes for its upcoming smartphones. These modes are very impressive:

Expect these features to land on one of Samsung’s upcoming flagships. The processing power needed for this type of video recording just isn’t possible with the mid-range processors found on Samsung’s mid-range phones, which means it’ll likely be the Galaxy S11 or another device that ends up with these features.

Samsung is expected to launch at least three flagship smartphones next year, including the Galaxy S11, Fold 2, and Note 11. But when it comes to design changes, only the Fold 2 is expected to get a significant makeover, according to recent reports. The Galaxy S11 and Note 11 may look a lot like their predecessors, although Samsung will probably add discrete changes in order to help consumers tell all of their phones apart. However, Samsung is also working on smartphone designs unlike anything seen on the Galaxy S or Note series so far. Samsung is working on a phone with a true all-screen design. The selfie camera remains the only front-facing element that can’t be removed or placed under the screen for now, although everyone in the business is looking at under-display cameras. Top and bottom bezels are also present on many devices right now, although flagship handsets have thinner bezels all around the screen. 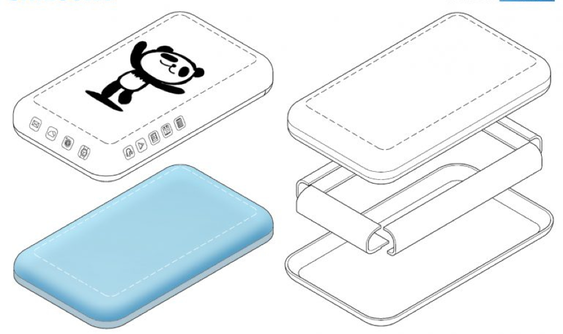 Source: Samsung via LetsGoDigital
​Samsung may not be adopting the waterfall display design that the   Vivo Nex 3 and Huawei Mate 30 Pro  introduced in 2019, but based on Ice Universe's tweet, Samsung won't be chancing it with the Galaxy S11, even if the edges are said to be narrower than the latest Galaxy Note 10.