Two new sources have backed up reports earlier this year out of Korea that Samsung won’t continue with the Galaxy Note series. No Galaxy Note 21 or Note 30. The Galaxy S21 will be released in January, 1-2 months earlier than previous years. The Galaxy S21, Galaxy S21+, and Galaxy S21 Ultra, are codenamed O1, T2, and P3, respectively. The base model Galaxy S21 will feature a plastic rear cover, while the S21 Ultra will use glass. But the Galaxy S21+ material was not leaked , because of the claim that the consumer response to the plastic material has been more positive than Samsung expected.

However, if the models are to be released in January, this decision has already been made.

The camera bump extruding from the upper left corner will be part of the frame itself, and the frame and camera bump will come in different colors depending on the colorway of the device. Samsung will use both the Snapdragon 875, the yet-to-be-announced successor to the Snapdragon 865, and the Exynos 2100. The Exynos 2100 is expected to be “on-par or better than the Snapdragon 875,” though it's unclear exactly how the chips will benchmark comparatively. The new Exynos will be a more power-efficient chip than prior generations, improving battery life. Both the Exynos 2100 and Snapdragon 875 are 5G compatible chips, and there will be 5G versions of every Galaxy S21 model, as was the case with the S20. The Galaxy S21 Ultra will be the only model to receive Wi-Fi 6E support, which Samsung claims it’s about 2x faster than standard Wi-Fi 6.

The camera arrays on the Galaxy S21 and Galaxy S21+ are reported to be the same as the Galaxy S20 series, which feature a 12MP main sensor, 64MP telephoto, and 12MP ultrawide. The Galaxy S21 Ultra main camera will feature an improved 108MP sensor, the second generation version of the sensor Samsung uses in the Galaxy S20 Ultra and Galaxy Note20 Ultra. The S21 Ultra will have the same 12MP ultrawide as the Galaxy S21 and S21+, but will feature two telephoto sensors: a 3x optical telephoto and a 10x optical "super" telephoto. Samsung has added 130% larger pixels and dual pixel auto focus on both the 3x and 10x optical lens. Thanks to the new 10x optical sensor, our sources say Samsung will be reviving 100X Space Zoom. Samsung will be using laser autofocus on the S21 Ultra, hopefully remedying the focus issues the S20 Ultra experienced. All of the cameras will support 4K/60fps recording, which was previously limited to the main sensor. Samsung’s Super Steady stabilization will also be getting 60fps recording. The camera will be able to automatically switch between 30fps and 60fps depending on the lighting conditions, just like the Google Pixel. For the three of you who actually care, Samsung is also adding an 8K 30fps option to the camera instead of the 8K 24fps that’s on the Galaxy S20 and Note20 series. Samsung’s also adding a dual recording mode, which records out of the front and rear camera at the same time. Samsung will also be improving night mode with more manual controls. Additionally, it will improve the moon mode that’s included in One UI 3.0, which will lock onto the moon and use EIS to make sure it’s in frame while taking the photo.

Ultra-Wide Band (UWB) will be supported on the Galaxy S21+ and Galaxy S21 Ultra. It will be used to track Samsung’s yet to be released SmartThings tags. Samsung will also be adding support for digital car keys to SmartThings with the S21+ and S21 Ultra. We don't have information on which manufacturers or countries will receive support for this feature. The Galaxy S21 series does look like a decent improvement of the previous Galaxy S20 series. Samsung is also rumored to be lowering the prices of the upcoming phones to be more competitive and match the recession and global pandemic though exact pricing for any market is not available. 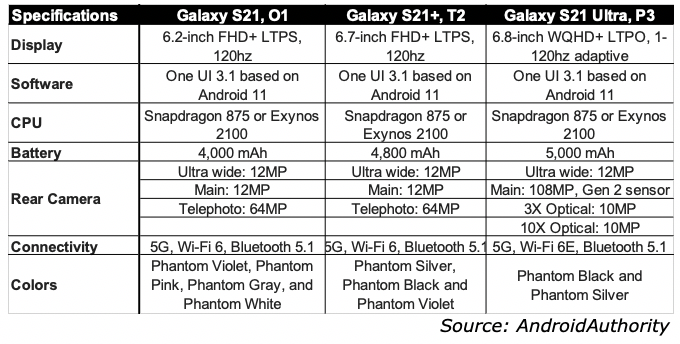